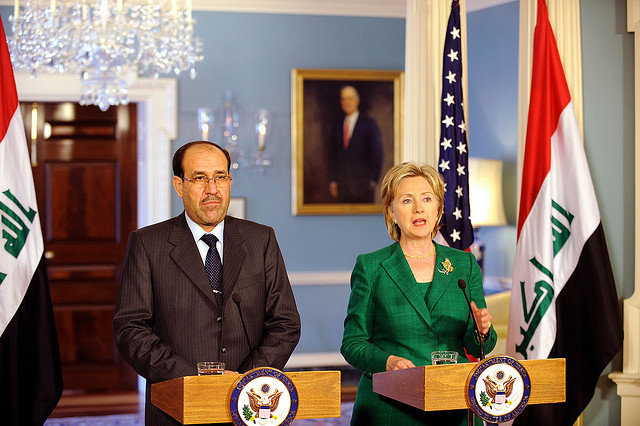 The signing on 6 December of a US-Iraq Memorandum of Understanding (MOU) concerning defense cooperation might suggest ties between Washington and Baghdad remain close, but such is not the case. In fact, the two sides have more generally experienced somewhat chilly relations in recent years, mainly because of actions taken by Prime Minister Nuri al Maliki’s government that are at odds with American goals in Iraq and within the Middle East region more broadly. One Iraqi policy in particular could soon have ominous consequences for Maliki and his allies.

Maliki and his military commanders need advanced military hardware such as F-16 fighters and the nearly 150 M1A1 Abrams tanks sold under prior agreements with the US as well as associated American training. These weapon systems outclass those of most of Iraq’s neighbors and will greatly help offset the glaring superiority in numbers of heavy weapons enjoyed by all surrounding states with the exception of Jordan and Kuwait. The MOU covers 5 years of exchanges, professional training on such complex systems, the development of Iraqi military intelligence and counterterrorism cooperation. Yet, even with this MOU, Baghdad may turn to cheaper sources, like Russia or the Ukraine, for a hefty slice of its defense needs. With so much materiel needed to equip a sizeable and competitive military, deals with non-US suppliers (like Moscow, which already has had military talks with Baghdad) would require less money per item, allow more units to be equipped, and involve sales with less strings attached. Additionally, most Iraqi military personnel are more familiar with Soviet-style armaments as a result of decades of purchases from the former Soviet Union, China, and others during the Saddam Hussein era.

There is, however, little else to be bullish about concerning the bilateral relationship. Maliki and his Shi’a backers largely opposed the late 2006 American program to partner with the bulk of Iraq’s Sunni Arab insurgents against al Qaeda in Iraq (AQI). This opposition was disruptive enough while the US had a substantial military presence in Iraq, but especially since the US departure, far too many Sunni Arab fighters who did so much to beat back the AQI threat have been denied employment in the Iraqi security forces and hounded by the regime. Some have even been hunting down and killed. These actions occurred in parallel with the exclusion of most Sunni Arabs from Maliki’s Shi’a=dominated and increasingly high-handed government and the Iraqi political mainstream in general. All this conflicted with the American vision of an inclusive and more genuinely democratic Iraq. Additionally, Sunni Arab interests in assisting Maliki and his allies against AQI have fallen off, and AQI’s ability to carry out devastating, mostly anti-Shi’a terror bombings remains robust and a major security threat, especially in central Iraq. Likewise, despite a host of electoral promises, Maliki has been unwilling to meaningfully address territorial demands on the part of the Kurdish Regional Government (KRG) in the north. Admittedly, the KRG has shown little interest in compromise either. Consequently, the overall atmosphere in the north between the government in Baghdad and the leaders of the KRG has been extremely tense for quite some time. Attempts at US and other outside mediation between the parties have either been unsuccessful or shunned by Maliki. So this festering ethnic dispute is likely to persist well into the future.

Most unsettling to the US has been Maliki’s close ties with Iran. Overall, it is clear that Tehran has had far more influence over decisions in Baghdad than has Washington for nearly five years. In fact, the more Maliki alienates both the Sunni Arab and Kurdish communities in Iraq, the more he needs a strong Shi’a ally hostile to the first and with some influence over the second. As a result, this relationship is likely to endure. Probably most disturbing — even infuriating — to the Obama Administration and much of the international community (including the Arab League) over the past two years has been Maliki’s failure to join in condemning the depredations of the Assad regime in Syria. Worst still, Iraq has allowed its airspace to be used for important Iranian resupply flights to Damascus. This is directly related to Baghdad’s close ties to Tehran and somewhat ironic considering the longstanding hostility between the pre-2003 Iraqi regime and the Assad’s.

Potential danger lurks in the sympathy Maliki has shown toward the now teetering Assad regime. That regime appears likely to be replaced with not only a Sunni Arab order, but one that could be somewhat Islamist. Before stability is restored, however, there also could be a prolonged period of infighting that would involve some robust Sunni extremist elements. Either of these scenarios would pose a security risk for a neighboring government that not only facilitated support for the Syrian regime, but also mistreats its prominent Sunni Arab minority. Adjacent to the Syrian border, Iraq’s Sunni Arab community (especially militants within it) could become the recipient of considerable assistance from sympathetic Sunni Arab elements within Syria or even a resentful and far more Islamist successor regime in Damascus, potentially further destabilizing the less than ideal situation already prevailing inside Iraq.