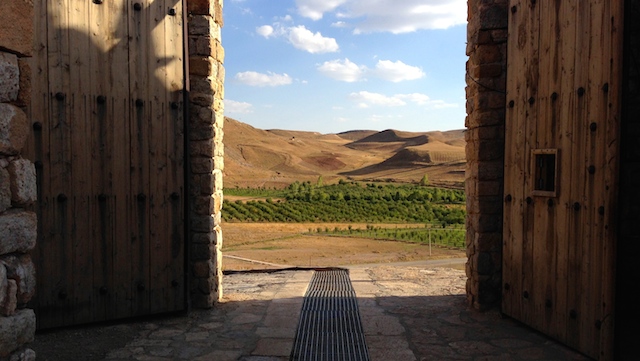 The doors at Takt-e Soileman, Iran. Photo by Monica Byrne.

Before I traveled to Iran, I didn’t want to read anything about Iran. Certainly nothing written by mainstream American news media, which often draws an absurdist caricature of the country. I wanted to arrive with an open heart.

But I knew that having an open heart wasn’t the same thing as an ignorant mind. I didn’t pretend to have more than a superficial knowledge of Iranian-American relations. I didn’t wish to gloss over the misdeeds of either country, including human rights abuses. I was just a writer, with three motivations:

No small task, of course. Not when people from both countries have been working toward that goal ever since the 1979 revolution ousted a pro-American monarch and replaced it with an Islamic Republic.

The revolution has impacted a whole generation of people in both Iran and America. But a new generation—including my friends and I—born after 1979, don’t have a memory of the revolution, or the occupation of the US Embassy in Tehran. There’s no case to be made for ignorance, but there is a case to be made for innocence: To us, the estrangement of Iran and America makes neither political nor intuitive sense. America’s simultaneous fidelity to Saudi Arabia and Israel feels odd and hypocritical. While I was in Iran, I asked my guide to explain the reason behind the sanctions. He couldn’t really explain it. I researched the sanctions. I couldn’t even explain them to myself. They just seemed pointless and arbitrary.

An older generation resigns itself to everything being the way it is. A younger generation questions why any of it has to be.

So where do we begin? And by “we,” I don’t mean the nation states; I mean “we” as individual citizens. Do we seek common ground? I’m not going to insult everyone’s intelligence by saying Iranians are just like Americans. That not only implies that Iranian lives only have value insofar as they resemble American ones; it also obscures our differences, including the religious orientations of our current governments, and the effects those orientations have on the public and private behavior of individual citizens. Those differences are real and important.

Yet those differences are not a real barrier to reconciliation. And as an American, I see the primary responsibility for reconciliation in America’s court. We are far more ignorant about, and hostile toward Iranians than Iranians are toward us. That is our shame. Are there people in Iran who chant “Death to America”? Sure, I guess, somewhere. I didn’t meet any of them. Are there people in America who can’t even locate Iran on a map? Yes. I meet them every day.

The good news is that both countries have made small acts of good faith over time, which then led to acts of good faith among individual citizens; my homeland became a home for people of Iranian origin and descent. They grew up in (or came to) America and made friends, including me. Those friendships then inspired me to travel to Iran. Filming a documentary in a vineyard near Pasargade.

While staying near the historical city of Pasargade, the final resting place of Cyrus the Great, I had a wonderful experience playing the part of an American tourist in a documentary that happened to be shooting near my guesthouse. The producers gave me a verse of Hafez, the great Persian poet, to say in Farsi:

Plant the tree of friendship,
and it will give the fruit of the heart’s desire.

Even now, two weeks after leaving Iran, the line still resonates with me. I’m not a politician. I don’t have the ear of anyone in power. The negotiations over Iran’s nuclear program are not accessible to me. But travel and friendship: these are tools that are available to me. They’re also available to millions of Americans, especially after Hassan Rouhani—known inside Iran as a moderate cleric with reformist ambitions—was elected president last year. By travel I don’t mean joining a mindless mega-tour group, whose members don’t interact with anyone except through the viewfinder of their cameras. I mean travel as a mindful and radical act: to seek one-on-one consensual reconciliation of Other and Self, of mutual transformation that leaves both parties more perfectly themselves than they were before. My last night in Iran, I went back to the Tomb of Hafez. The first time I’d gone was daytime, when tourists go; evening is when Iranians go.

The air was cool and electric. In the northeast corner of the courtyard, a square of rugs was set down for evening prayer. Up and down the steps of the tomb came students, artists, professors, pairs of women, pairs of men, parents with teenagers, parents with toddlers. A young couple—the girl wearing a scarf fashionably high on her head, the boy wearing all black, with a gold chain—walked up to the tomb and fidgeted there, unsure of how to behave. Some placed their fingers on the tomb, their lips moving. Others checked their smartphones, or took selfies. A man in a grey suit hovered by one of the columns, reciting Hafez to whoever would listen.

As per an Iranian tradition I’d read about, I circled the tomb seven times and then sat down, legs crossed, with my back to one of the pillars, and asked the question in my mind: How do Iran and America reconcile?

And then I opened my English translation of The Divan of Hafez, which my guide Mohamad had bought me as a gift. This was the first verse my eyes fell upon:

Joyous that day from when this desolate abode, I go:
The ease of soul, I seek: and for the sake of the Beloved I go.

The answer gave me chills.

But I didn’t have time to think more about it, because just then, the men who’d finished praying came to take a group picture on the steps of the tomb. They asked me where I was from, and like everyone who heard I was from America, were delighted and extremely welcoming. We could communicate very little, but they managed to tell me they were from nearby Estahban, a city famous for figs.

Our conversation drew onlookers. Soon it was a crowd of twenty or more. Someone asked if I spoke any Farsi. I got really excited because I remembered my line from the vineyard documentary, so I started:

And the entire crowd finished it with me as if it were a song we’d long rehearsed.

The man in the grey suit who’d been reciting Hafez behind us called “Yes! Yes! Thank you!” and rushed forward to pour peanuts and raisins into my hand.

A translator materialized; the crowd was now asking me why I’d come to Iran. “I want Iran and America to reconcile,” I said. Immediately applause broke out. “Tell your government!” someone called out. “I’m trying!” I said, waving my Moleskin. It felt like such a paltry gesture. But I have to believe that it was something. That these gestures of good faith would also come to bear fruit, like the gestures of good faith that had sent me there in the first place.

American news outlets often portray Iran as something like Mordor, the strange and unknown wasteland from J. R. R. Tolkien’s Middle Earth. The average American mostly follows suit. Now that I’ve been there, what can I say to that? Where can I even begin?

I spent my last night in Iran on the steps of Hafez’s tomb, talking. Men, women, mothers, fathers, teenagers, girls, boys, children—all eager to talk. A daughter translated, and a father filmed the impromptu interview. A son translated, and told me the meanings of all his family’s names. I ripped pages out of my Moleskin and wrote down my contact information for five, ten, twenty people; and got theirs in return. Blog, Gmail, Twitter, Facebook, Viber, Whatsapp, Instagram—we would find each other there (even if some of those applications are illegal in Iran). The men from Estahban returned with a handful of figs and poured them into my hand on top of the peanuts and raisins. My heart overflowed. I didn’t want to leave. In just thirty days, Iran had become beloved to me.

I’ll be back soon, inshallah. In the meantime, to every single American who is able, I echo Hafez:

For the sake of the Beloved, go.

Monica Byrne is a novelist, playwright, and traveler based in Durham, NC. Her first novel The Girl in the Road was published by Penguin Random House in May. She writes from home and abroad on her blog. (Featured Image: The doors at Takt-e Soileman, Iran. Credit: Monica Byrne.)