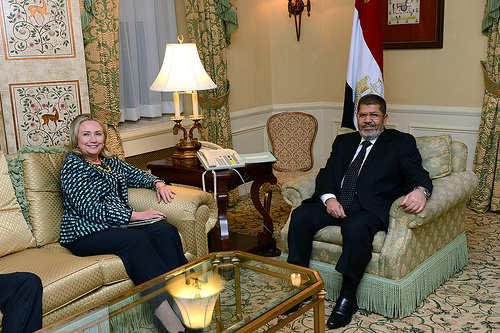 The bad news about Egyptian President Mohamed Morsi’s expanding constitutional powers in Egypt is the threat of another dictatorship in Egypt. The good news is that normal politics is returning to Egypt after decades of brutal authoritarian regimes.

Recent mass demonstrations in support of and opposition to Morsi’s new draft constitution and the political tug of war between Morsi and the judiciary — especially the Judges Club — signify healthy signs of democratic politics, which the Egyptian people fought for before and since Tahrir Square.

Egyptians are openly debating the meaning and implications of each of the 234 articles in the new constitution, ranging from the establishment of a four-year presidential term that can be served twice, to freedom of worship and social justice.

Opponents of the document correctly claim that it’s excessively religious, especially with the role assigned to al-Azhar Islamic University, and is barely inclusive. Rights of women and minorities are not clearly spelled out although followers of other Abrahamic religions have the right to select their own religious leaders and conduct their personal status matters according to their religious dictates.

These raucous and often turbulent constitutional debates and the verbal scuffles between the judiciary and the executive branch seem to signal the advent of rational politics and the promise of pragmatic political compromises. The upcoming popular referendum on the document will tell whether the Egyptian people support or oppose the draft document.

Egypt has not witnessed or enjoyed this type of political jockeying at the popular level since before the middle of the last century. Even if the draft constitution is adopted, Morsi can serve a maximum of two terms — something Egyptians have not known for generations.

The United States should not get involved in this debate and should allow the Egyptian people to sort out their political differences. Privately, Washington should point out to Morsi that tolerance, inclusion, and minority and women’s rights should be the hallmark of governance in the new Egypt.

Constitutional tensions in Egypt, however, should be viewed in the broader context of the emerging Arab Sunni order in the region. This new regional alignment is led by Egypt, Qatar, Saudi Arabia, and Jordan, and tacitly supported by Turkey. It is perceived in the region and globally as a front to isolate Iran and diminish its regional influence, speed up Bashar al-Assad’s fall, and help break up the Iran-Syria-Hizballah “Axis of Resistance.”

This Sunni architecture could also pull Hamas away from the Iran-Syria camp and move it closer to the Sunni fold. The recent military confrontation between Israel and Hamas in Gaza had the unintended consequence of strengthening Hamas’ regional posture and cementing relations between it and Sunni Arab leaders, ranging from Qatar to Tunisia.

Although Washington has quietly endorsed the new regional Sunni politics, US policymakers and intelligence and policy analysts should consider the possibility that in the long run, the new order could also spell trouble for Arab democratic transitions and for the West. The short-term gains, while critical for the region, are already happening. Iran is becoming more isolated and its relations with Arab states and non-state actors are fraying.

Assad is on his way out, and within months or even weeks, Syria will begin to experience the convulsions of a new political order. Forceful Western warnings from President Barak Obama, Secretary Hillary Clinton and others against the possible use of chemical and biological weapons could be the prelude of Western military intervention in Syria.

The Hizballah alliance with Iran and Syria is already breaking up. Hizballah and its leader Hassan Nasrallah have lost much of their legitimacy as a symbol of resistance or “muqawama.” Nasrallah’s vocal and consistent support of Assad is viewed in the region as naked real politic, which has undercut his standing as a regional leader.

In the long run, the emerging Sunni order could undermine the gains of the Arab Spring and threaten the transition to democracy in post-authoritarian Arab countries. More importantly, the new order could embolden Sunni regimes in Saudi Arabia, Bahrain, and elsewhere in their continued repression of their Shia communities and other ethnic and religious minorities.

While the leaders of Saudi Arabia and Qatar are pushing for Assad’s removal, they are not necessarily wedded to democratic principles or to granting their citizens, especially in Saudi Arabia and Bahrain, equal rights. Nor are they enamored by the principles of “freedom and human dignity” highlighted in the Egyptian draft constitution.

Unless the emerging Arab Sunni order commits itself to the principles for which millions of Arab youth fought for two years ago, and unless it goes beyond just containing Iran and toppling Assad, it will remain problematic and fraught with uncertainty.

– Emile Nakhleh is the former director of the Political Islam Strategic Analysis Program at the CIA and author of A Necessary Engagement: Reinventing America’s Relations with the Muslim World