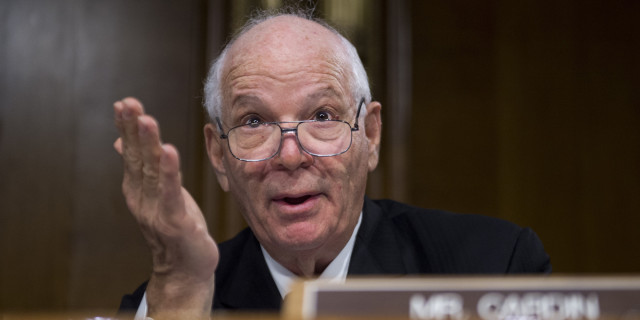 In an op-ed published by The Washington Post on Friday, Sen. Ben Cardin (D-MD) announced that he will join Republicans and Sens. Menendez (NJ) and Schumer (NY) in voting to reject the Joint Comprehensive Program of Action (JCPOA). He also pledged to introduce new legislation designed to “strengthen” congressional review of the agreement and “U.S. regional security strategy.”

His remarks tend to confirm what we’ve been reporting. A “bipartisan” group of senators, led by the ranking member of the Foreign Relations Committee, will very soon introduce new legislation that will include “poison pills” designed to sabotage implementation of the agreement. This group of senators hope to draw enough Democrats, like Sens. Booker and Warner (see yesterday’s post), to create a veto-proof majority.

In his op-ed, Cardin (who, I understand will get a Democratic co-sponsor in Colorado Sen. Michael Bennet later today) avoided mentioning specific “poison pills,” such as renewal of the Iran Sanctions Act or delivery of Massive Ordnance Penetrators (MOPs) to Israel, that were cited by the other two senators. His description was instead of a more general nature:

This begs the question of what the specifics will be. For example, will the security assistance package for Israel include MOPs? Unclear. And what are the implications of “expedited consideration” by Congress of new terrorism-related sanctions, something that neocons like Fred Kagan and Juan Zarate have been pushing heavily in recent days, as I pointed out earlier this week when I posted the draft summary of “The Iran Policy Oversight Act of 2015?”

One thing is certain: hardliners in Tehran will use any new sanctions-related legislation during the forthcoming debate in the Iranian parliament to raise questions about Washington’s good faith and whether Obama can really deliver what was promised in Vienna.

The White House (whose efforts, if any, to negotiate with Cardin are obscure) and other JCPOA supporters could take some comfort in one phrase in Cardin’s op-ed: “This [legislation] would be consistent with the administration’s interpretation of the agreement and complement its regional security commitments.” Now, the administration is very likely to interpret the agreement pretty literally, and, if Cardin is serious about his intention to align the bill with the administration’s interpretation, then this might yet turn out okay. But any talk of “strengthening” the JCPOA suggests that he’s not on the same page. And, if it indeed proves acceptable to the White House, then it won’t be acceptable to the Republican majority, in which case the bill will be dead on arrival.

Cardin did not say when precisely he intends to introduce his bill, or whether he expected Republicans to rally behind him. He did say, however, that he expected that the legislation will be “backed by supporters and opponents of the deal.” And if this is indeed AIPAC’s “Plan B,” then clearly the strategy would be to put together a veto-proof majority of Republicans and Democrats eager to demonstrate their devotion to Netanyahu’s Israel and their abiding hostility toward Iran. Of course, Republicans will only go along with such an effort if the legislation contains the requisite number of provocations and poison pills to ensure that the JCPOA will never be implemented, at least by the United States.

The devil, as always, will be in the details.

For the latest information on the math, politics, and parliamentary permutations of the upcoming vote on the resolution to disapprove the JCPOA, check out Greg Sargent’s latest blog here.