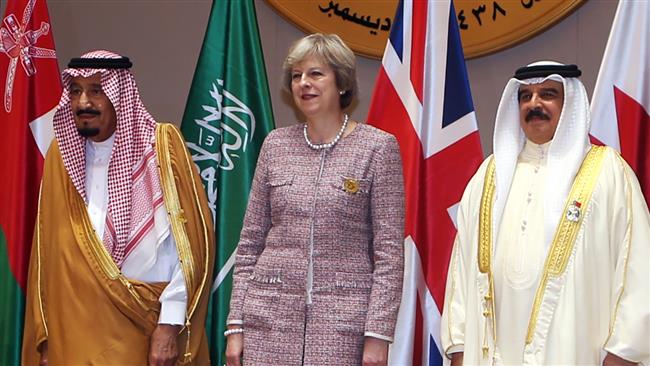 Iranian “influence fuels instability in the region,” she told the Gulf Cooperation Council (GCC)’s 37th Leaders Summit, adding, “I am clear-eyed about the threat that Iran poses to the Gulf and the wider Middle East.” She committed the UK to “working with you to counter that threat” and “push back against Iran’s aggressive regional actions, whether in Lebanon, Iraq, Yemen, Syria or in the Gulf itself.”

May reiterated this “blame Iran for everything” narrative during her recent visit to Washington, DC, in a speech to Republican Congress members. “Iran’s malign influence in the Middle East” would be countered, she insisted. “This is a priority for the UK too as we support our allies in the Gulf States to push back against Iran’s aggressive efforts to build an arc of influence from Tehran through to the Mediterranean.”

Furthermore, she declared that the United States and Britain would triumph together in a clash of civilizations “by proving that open, liberal, democratic societies will always defeat those that are closed, coercive, and cruel.”

Shortly after her visit, Donald Trump signed an executive order banning visa and green card holders from seven Muslim-majority nations, including Iran, from entering the United States. Conspicuously absent from the list of affected countries? The monarchies of the Arabian Peninsula. Of course, no Iranian has ever been convicted of committing an act of terrorism in the United States, as opposed to several Saudi citizens, despite the Trump administration referring to the order as an anti-terror bill.

Behind the overblown rhetoric is a convergence of Western bellicosity and economic opportunity.

After Brexit, Britain is desperately seeking to deepen its relationships with new and emerging markets outside Europe. Such reliable cash cows can be found in the “closed, coercive, and cruel” regimes of the GCC and Turkey. Prime Minister May recently visited Turkey in order to sign several trade deals. But the GCC states top the list of buyers, primarily for one reason: the UK’s massive arms industry knows where to find its best clients.

Britain sees these countries as excellent markets for UK-made weaponry. The more these states are told to guard against an Iranian menace, the more missile systems they’ll purchase. May is cultivating alliances based purely on divide-and-conquer hubris, mercantile mentality, and short-term economic gains, policies long pursued by her predecessors, albeit at times with less fanfare and ideological verve.

Strengthening “democracy” and promoting “freedom” are cynical talking points. The UK is the second biggest arms dealer in the world, and the bulk of its clientele are egregious human rights violators. Since 2010, two-thirds of British weapons were sold to Middle Eastern nations, many of which are listed on the UK government’s own human rights watch list.

Unsurprisingly, there is no regard for human rights in any of these dealings. The Brexit fallout may facilitate this trend further, as Britain will no longer be bound to the European Union’s human rights principles, which had restricted granting individual export licenses for sensitive weapons in the past. In this way, and through new military installations in Oman and Bahrain, the United Kingdom has announced its new role “east of Suez” after it left the region in 1971.

The presence of Western powers such as the United Kingdom and the United States in and around the Persian Gulf has not led to a stable security order in the area. In fact, in past and present, their presence has been a source of conflict, aggression, and regional turmoil. A viable security order in the Persian Gulf region cannot be imposed from the outside and certainly not through perpetually feeding an arms race. It will only come about organically from within, established as a mutually beneficial pact by the littoral states and other immediate stakeholders.

History has already provided a model for Persian Gulf states to emulate. Philosopher Arshin Adib-Moghaddam has argued in several front-page interviews in the Iranian press that regional powers could learn from the Helsinki Final Act, which emerged from the 1975 Conference on Security and Cooperation in Europe. The treaty, agreed to by 35 countries in the midst of the Cold War, created a process whereby NATO and Warsaw Pact member states could conduct diplomacy, reduce tensions, and ultimately avoid military conflict on the basis of non-intervention in internal affairs and respect for legitimacy, borders, and territorial integrity. The Association of Southeast Asian Nations (ASEAN) is another regional organization whose mission and coordination could serve as an inspiration to the Persian Gulf area.

The history of the region demonstrates that security institutions that are not inclusive and collective, such as the GCC, increase tensions. In the Persian Gulf itself the security of the monarchies of the Arabian Peninsula cannot be fully guaranteed if other littoral states such as Iran and Iraq are excluded. Lasting security requires institutions that encompass all stakeholders in the region and that are not tainted by the politics of identity. ASEAN and the 35-member Organization for Economic Cooperation and Development are good templates in that regard.

Unfortunately, the current state of affairs between Iran and the GCC nations, deliberately exacerbated by the U.S. and UK governments, won’t allow this sort of forward-thinking vision. Nevertheless, the Persian Gulf region needs a security architecture that addresses the concerns of all states. Neither Britain nor the United States has shown any interest in such a non-militaristic and non-interventionist approach to the region. If Iraq, Iran, and Saudi Arabia work together, such an order could be delivered with no external interference.

At that stage, what renowned political theorist Karl Deutsch so aptly called a “pluralistic security community” could be achieved. Then the people of the region could finally imagine a lasting regional order that delivers peace.

Javad Heiran-Nia is the head of the international desk of Mehr News Agency (MNA), one of the biggest news outlets in Iran. Photo: Theresa May and the GCC.