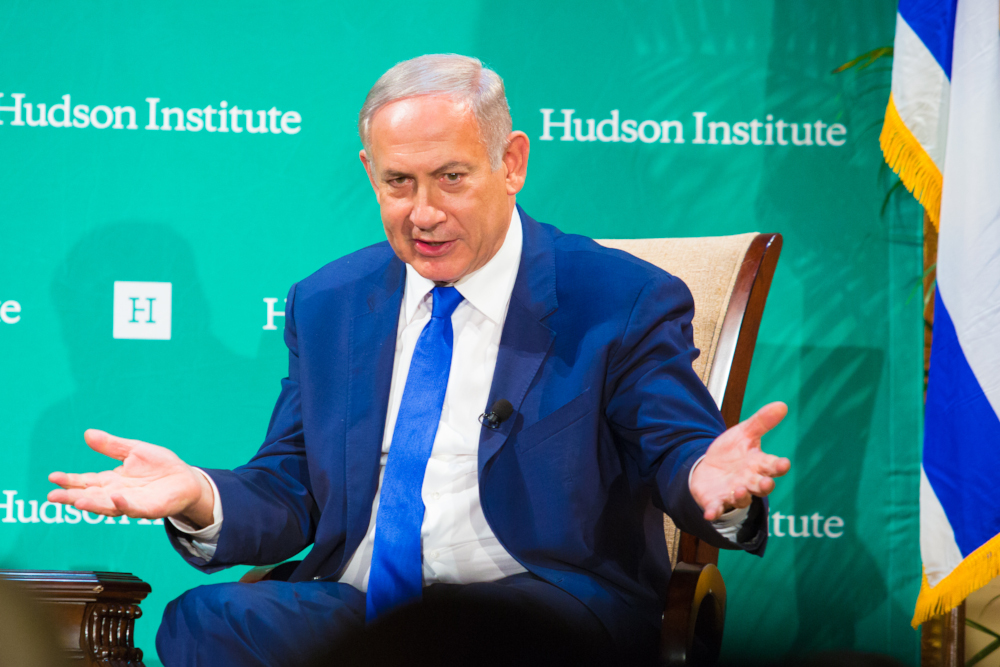 On Wednesday night, the day after Trump announced his withdrawal from the Iran deal, in between Israeli airstrikes in Syria, Israel’s Channel 2 News reported the Likud’s highest polling numbers in a decade — 35 seats, five more than it holds today.

Is it really that simple? Netanyahu, 12 years in office, facing multiple corruption investigations and a possible indictment, just pulls out the magic security card and his polls rise as if standing at attention. As Arlo Guthrie once said, “it’s amazing that somebody can get away with singing a song this dumb, for that long.”

But oh, those numbers. The glory of watching rivals wither: Yair Lapid, who had to defend himself this week from an unforgivable position that just maybe the U.S. should not withdraw unilaterally or immediately from the scourge of a deal, slid down to 18 seats in the poll, far from his party’s perch in the mid-20s in recent months.

Other electoral dynamics did not change significantly. A new party established by former Israel Beitenu MK Orly Levi dropped from eight seats – which in fairness was probably an inflated result anyway – to five in the current poll. Given that she comes from the right, those votes probably went to Likud. In times of war, you don’t play around with girlie parties.

On Tuesday night, moments before Trump was due to speak, the IDF ordered bomb shelters in the Golan Heights opened, following IDF “leaks” about suspicious Iranian troop movement. Wednesday night, 20 rockets were fired from Syria – none actually hit Israel – apparently by Iranian forces or proxies, sirens went off in the Golan, and Israel launched its largest airstrikes in Syria in decades. As Israel cheered Trump’s announcement like a choir, war felt more imminent than at any time in recent years.

Still, a few days earlier, a friend told me that if elections were held today, she would change her vote from Kachlon in 2015, to Netanyahu. Never his biggest fan, she explained that despite her misgivings, she cannot help being impressed by a few of his achievements, citing three examples: his ability to navigate Israel through political and military challenges; expanding Israel’s foreign relations, which also helps the economy; and his pride in the country’s Zionist and Jewish identity.

These points highlight what so many Israelis mean when they say Bibi keeps Israel strong. And there’s nothing dumb about them. In fact, they all check out.

Working backwards, the vast majority of Jewish Israelis have no qualms or doubts about Zionism, and insist on a leader who is Zionist — who makes them proud of Israel being a Jewish state. Pride in one’s country is something most people wish to feel. Dissenters and sourpusses, as Netanyahu once called them, are healthy for democracy, but they are never popular.

The point about Israel’s foreign relations is also true – Netanyahu has made his outreach to unusual places a central theme of his leadership. Highly publicized trips to Africa, Russia, India, and Azerbaijan have been presented exactly for what they are: proof to the pesky Western countries, especially during the Obama years, that Israel has other friends. Boycott storm clouds hovering over the EU? Israel has other trading partners.

There’s also a bonus benefit: chumming up with non-democratic countries legitimizes their style of leadership. If Netanyahu relates to Putin as a stalwart ally, or to the authoritarian regime of Ilham Aliyev in Azerbaijan, a bit of Supreme Court-slamming back home doesn’t seem so unreasonable.

But never mind other friends. Netanyahu’s Israel is quite beautifully integrated into the entire Western global economy itself, and is a part of every Western diplomatic club. Rhetorical and symbolic policy gestures criticizing Israel’s policy seem to be the best the EU can do. Netanyahu’s AIPAC speech was hard candy through and through, but he was not factually wrong about Israel’s leading role in hi-tech, cyber security, AI and other highly IPO-able businesses.

And the third point: Political and military navigation. Who wants war? Israelis believe themselves to be a peace-loving, peace-seeking people in the national narrative. But wars come to us. It is the way of the world, not the result of leadership. When they occur, we’d better have the right person at the helm.

That leads back to Iran. Netanyahu traduced the Iran deal so relentlessly and successfully that 62 percent of Israelis polled by Channel 2 on Wednesday said they supported the U.S. leaving the deal. How could they not? His ministers regularly compared it to Munich 1938. Trump’s props to the prime minister’s PowerPoint presentation drove home the sense that Washington’s withdrawal was largely Bibi’s victory. That’s not wrong either. Netanyahu has made a career out of hammering away at Iran and now he has the most receptive ear ever in the White House. After all, Netanyahu’s speech was among the last things Trump heard before announcing his decision, which practically ensures that he was a decisive factor.

In the Channel 2 poll, the very same portion of Israelis who support the withdrawal also said they now fear a war with Iran: 62 percent. They probably don’t think war is preventable. But that number is probably a spike. Just a few days earlier, the monthly Peace Index published its April survey, showing that just 40 percent believe Israel will soon go to war with Iran. If the next few days hold steady, the higher number might decline again soon.

But if there is a war, best to feel confident – and strong. The Peace Index showed that fully 64 percent said Israel had very or somewhat high chances of defeating Iran in such a war. Among Jews, the number was 71 percent.

Netanyahu’s favorability rating has been steady at around 45 percent, give or take, which is enviable for a four-term incumbent. The fact that over 60 percent of Israelis gravitate to the security issue shows a surplus of people who are not Netanyahu’s natural supporters but, under his rule, feel strong enough for war.

So the next time there is a development in Netanyahu’s corruption cases, before asking “how can Israelis possibly still support him?” remember that in exchange for these types of strength, many are willing to forgive what they see as routine political shenanigans.

As for the leader who defines national strength by the health and independence of the country’s democratic institutions, a free and thriving civil society, strong minority protections, whose determination to end the half-century suffocation of Palestinians is as steely and steadfast as Netanyahu’s anti-Iran campaign, who rejects cheap fear as the crutch of popularity, and for whom integrity is not a dirty word — well, if that leader exists, her time has not yet come.

Dahlia Scheindlin is a leading international public opinion analyst and strategic consultant based in Tel Aviv, specializing in progressive causes, political and social campaigns in over a dozen countries, including new/transitional democracies and peace/conflict research in Israel, with expertise in Eastern Europe and the Balkans. In Israel, she works for a wide range of local and international organizations dealing with Israeli-Palestinian conflict issues, human rights, peacemaking, democracy, religious identity and internal social issues in Israeli society. Dahlia holds a PhD in political science from Tel Aviv University, and she is the co-host of The Tel Aviv Review podcast. Reprinted, with permission, from +972 Magazine.