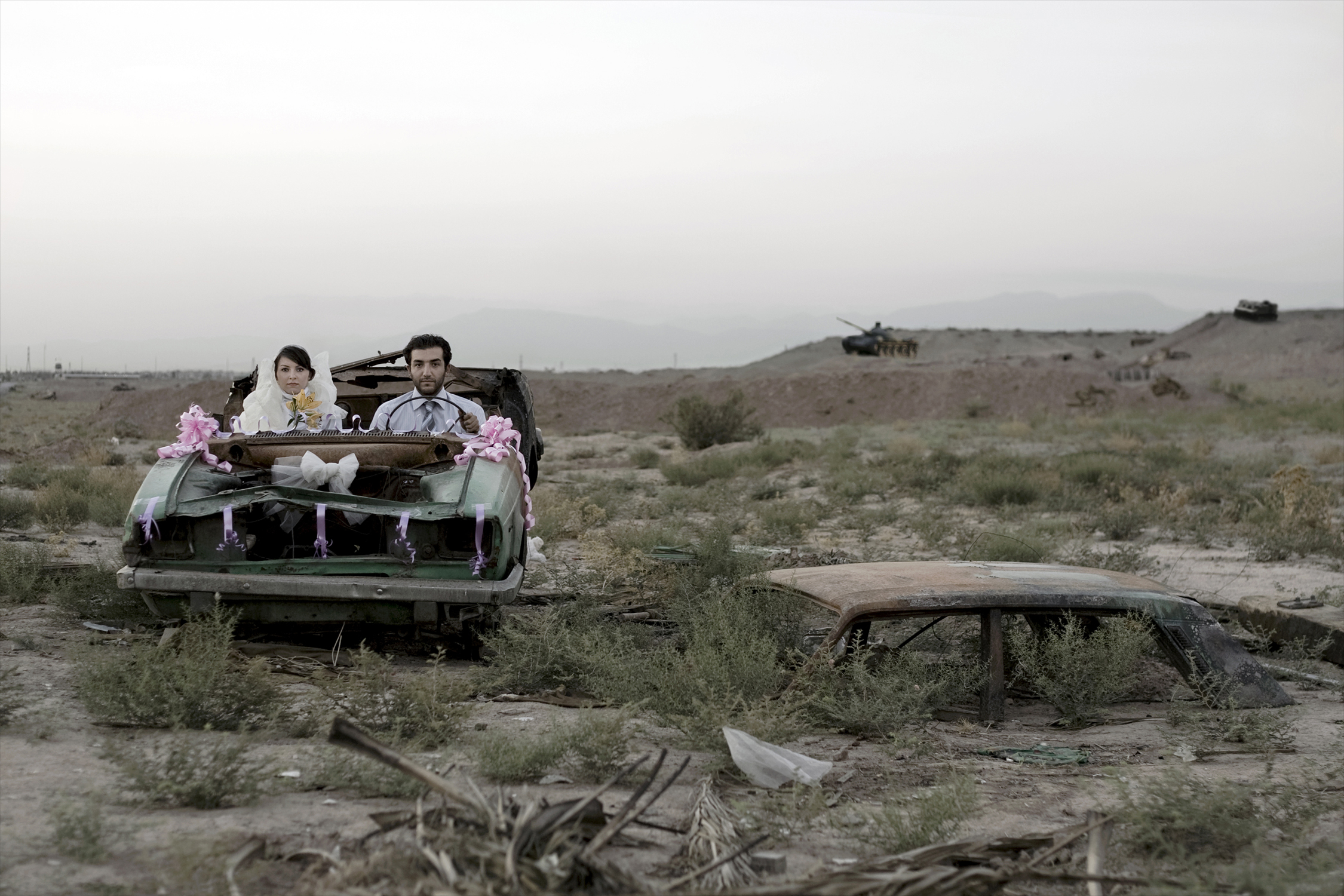 A veiled Iranian woman fixes her viewers with a fierce gaze. She shouts a muted song, and we can’t help but stare back.

This portrait is part of the landmark exhibition “She Who Tells a Story: Women Photographers from Iran and the Arab World,” which opened last week at the National Museum of Women in the Arts. The exhibit features 80 photographs and video installation by 12 female Middle Eastern photographers, four of them born in Iran. The collection begins with Iranian photographer Newsha Tavakolian’s “Listen” series, inspired by her childhood dreams of becoming a singer. There are six portraits of professional women displayed singing without sound, across from fictional CD cases left empty. These singers are forbidden in Iran to perform and record solo, but nothing forbids them from performing in silence. Although the government, according to Islamic tenets, censors their artistic pursuits, they are by no means erased. Their fierce but private empowerment is further depicted in the women photographed on the CD covers, wearing bright-red boxing gloves or and standing against waves crashing in the water.

“For me a woman’s voice represents a power that if you silence it, imbalances society and makes everything deformed,” Tavakolian observes. “The project ‘Listen’ echoes the voice of these silenced women. I let Iranian women singers perform through my camera while the world has never heard them.”

As the first images, these defiant and imposing women in the “Listen” series encourage viewers to participate in a larger cultural discourse when looking at the rest of the exhibition. The collection is filled with interwoven narratives and personal stories about modern life in Iran and the Arab world, challenging the Western media’s dominant portrayal of Middle Eastern women as “oppressed” and “marginalized.”

Curator Kristen Gresh launched the exhibition in 2012 at Boston’s Museum of Fine Arts. After working in Cairo and Paris, Gresh found “the most powerful, provocative, and compelling work to be by women photographers” she explained in an interview with BBC. Curating works from such a diverse and vibrant region, without slipping into generalizations, is a large undertaking. The exhibition highlights the mosaic of cultures by drawing on a wide range of subjects and showcasing a diversity of photographic methods.

In an interview with Sian Cain in The Guardian, Tavakolian discusses her hopes to capture her generation truthfully, “When people outside Iran talk about Iranian society, there are two extremes: conservatives covered in beards and chadors, and glamorous, Barbie-style women with coiffed, blonde hair,” she said. “We did not allow foreign photographers in for so long that they are drawn to the photogenic extremes. I strive to take the invisible in Iran and make them visible to the outside world.”

The four Iranian photographers in the exhibit all attempt to span the full range of Iran’s rich cultural heritage with their work. The chief curator, Kathryn Wat of the National Museum of Women in the Arts, said in an interview that the images by the Iranian photographers deal very directly with Iran’s history, both ancient and recent: ”I perceive (there is) a deep and abiding interest in Iran’s cultural character in these images.”

This is the most apparent in Shadi Ghadirian “Qajar” series where she staged 33 sepia-toned photographs inspired by 19th-century Persian ruler Naser al-Din’s wives. The Qajar girls, like the singers in the exhibit’s initial images, look at you with a blazing tenacity. ”They decide for their lives,” said Lebanese-Iranian curator Rose Issa in an interview with the Kitchen Series. “They take risks. They use the things that are forbidden. They are not embarrassed. They don’t have their eyes down as Muslim women should do.” Ghadirian juxtaposes the dress and traditional backdrops associated with the Qajar dynasty, which ruled Persia from 1785 to 1925, with modern objects such as boom boxes, Pepsi cans, Western instruments, and tutus, all forbidden during that time. The result provides a glimpse of current Iranian women caught between the traditional and the modern, negotiating a paradoxical mixture of the two.  “This conflict between old and new is how the younger generation are currently living in Iran,” Ghadirian told The Guardian. “We may embrace modernity, but we’re still in love with our country’s traditions.”

A similar paradox is realized in Gohar Dashti’s  “Today’s Life and War,” a staged story of a couple going about their daily lives in a war-destroyed field with tanks looming in the background. But the stoic couple go on with their lives, coexisting with armed conflict, at the dinner table and as they drive off on their honeymoon. These photos emerged from Dashti’s experiences as a child living on the border during the eight-year Iran-Iraq War. There she sensed a common experience of “group memories shared by an entire generation,” Dashti said in an interview with Lucky Compiler. “Playing with complexities of time, being both in the past and the present which affected me deeply helps incorporating a degree of neurosis into my photography.”

Across the adjacent room hang selections from Shirin Neshat’s “Book of Kings” series: a contrast of black-and-white portraits of modern women and men with Iranian poetry written in black ink over their bodies.

After receiving critical claim worldwide, three of the four Iranian photographers continue to live and work in Iran. They are strong advocates for Iran as a vital and important audience for their work. Since the 1979 Islamic Revolution and the elections of June 2009, many women have emerged in the public sphere, including many young women photographers who have overcome obstacles to working in Iran. In his essay “Poetics and Politics of Veil, Voice, and Vision in Iranian Post-Revolutionary Cinema,” Hamid Naficy writes on the rise of women in the arts: “The rise of differently situated women directors is emblematic and constitutive of the forceful emergence of women into the public space in many spheres, including politics, cinema, television, press and performing and visual arts.”

Marika Sardar, a curator of South Asian and Islamic art at the San Diego Museum of Art, agrees: “many visitors would be surprised at the level of freedom, education, politics and intellectual activity” available to women in the region.

Work by Newsha Tavakolian, Gohar Dashti, and Shadi Ghadirian are displayed in Tehran and international galleries. However “they choose to always first show their work at home before sending it abroad,” says Gresh in an interview The Islamic Monthly. In the midst of extensive negative media coverage of Iran in the West, the work of these photographers is an important glimpse into the country’s thriving arts community.

In an interview with with PhotoQ, Tavakolian discusses her choice to work in Iran. “When things are more personal, and closer to you, your work becomes more impactful,” she said. “I’m privileged, because I don’t need to go to far away places to work. I can be at home. I know the subject and I deeply care about it, so it’s more effective.”

When first mounted several years ago in Boston, “She Who Tells a Story” was one of the first exhibitions of its kind. Since then, more attention in the United States has focused on contemporary art coming from the region. Bringing this collection to Washington, DC, gives these women artists from the Middle East a broader national audience and broadens the understanding of the region among Americans. As New York writer Sarah Hassan points out, it’s a particularly important moment in U.S.-Middle East relations to get “beyond news headlines and night-vision photographs.“

“She Who Tells a Story: Women Photographers from Iran and the Arab World” will be open till July 31 at the National Museum of Women in the Arts in D.C. The museum will be hosting reading clubs, workshops, gallery talks, and a special artist in conversation with Rania Matar, a featured photographer, on June 10. For more information: http://www.nmwa.org/

Sanam Emami is an arts-education activist by day, culture gobbler by night, and avid learner always. She has produced cultural events internationally and is an advocate for art that brings urgent issues center stage and empowers marginalized voices to tell their stories.