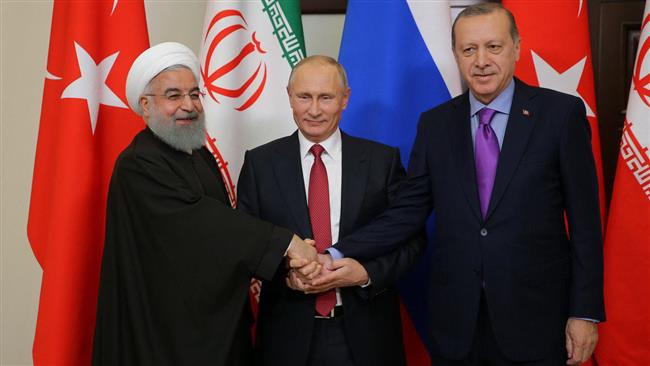 As the military phase of the Syrian conflict reaches its final stages, the leaders of Russia, Iran, and Turkey met in Tehran on September 9 and reiterated in a joint statement that a political solution to the Syrian conflict requires inclusive, free, and fair elections with the participation of all eligible Syrians under appropriate UN supervision. They further reaffirmed their determination to cooperate to eliminate the Islamic State, the Nusra Front, al-Qaeda, and associated groups in Syria.

When the civil war in Syria began in 2011, the U.S.-led bloc and its regional allies, including Saudi Arabia, devoted their resources to removing Syrian President Bashar al-Assad. However, as the result of Iranian-Russian cooperation to buttress the Assad’s government, they failed to achieve their goals. The addition to this alliance of Turkey, which initially opposed Assad’s government, has further made it clear that President Assad has won the six-year war and will remain in power. If successful, the trilateral cooperation can play a more substantive role in managing other crises in the region.

Russo-Iranian relations were not always close. In fact, some of the bitterest eras of contemporary Iranian history were shaped by Russo-Iranians wars, after which Iran was forced to sign the humiliating treaties of Turkamanchay and Gulistan. After the end of World War II as well, Soviet forces refused to leave Iran’s territory and began supporting separatist groups in Azerbaijan.

Unlike Russia however, Iran’s relations with the United States began friendly, and Americans were perceived as a benevolent power. Relations began to decline over six decades ago when a U.S. and U.K.–led coup removed Iran’s democratically elected prime minister, Mohammad Mossadegh. After the Islamic Revolution of 1979, the United States supported Saddam Hussein’s invasion of Iran and his use of chemical weapons against Iranian troops.

Ever since the Islamic Revolution of 1979, the foundation of Iran’s foreign policy has been “neither East nor West.” This implied that Iran would pursue an independent foreign policy. However, hostile U.S. policies have created deep mistrust and pushed Iran further to the East. Recently, Supreme Leader Ayatollah Khamenei announced that he made a mistake by allowing the nuclear negotiations with the United States to take place. His foreign policy advisor, Ali Akbar Velayati, also went on to call Trump “unreliable” but described Putin as “logical and brave.”

Iran’s mistrust of US is not unfounded. Forty-five American military bases with 130,000 soldiers are stationed near Iran. In addition, for the past 40 years, the United States has advocated for a regime change in Tehran and confronted Iran’s regional role, while trying to stop its economic progress, by enacting and enforcing economic sanctions.

Meanwhile, Russia, China, and India do not have an unfriendly military presence in the region. These countries consider Iran a political, economic, and security partner. They recognize that Iran plays an important role in fighting terrorists, and they have opposed the U.S.-led policy of regime change.

Iran’s relationship with China and India, the two major Eastern powers, has historical roots based on mutual respect and friendship. The Eastern bloc powers have been able to maintain a balanced relationship with Iran and its regional adversaries, especially Israel, Saudi Arabia, and the UAE, while the United States only engages with Iran’s regional enemies.

The Joint Comprehensive Plan of Action (JCPOA), commonly known as the Iran nuclear deal, could have created a positive change after 40 years of hostile relations with the West. It was the first time the United States and Iran were officially negotiating at their highest diplomatic levels.

Over the past three years, Iran has fully implemented this agreement. Billed as the most comprehensive nuclear non-proliferation document, this agreement could have served as an opportunity for further discussions to resolve other regional issues. In 2015, Ayatollah Khamenei said, “If the nuclear negotiations were to end without ‘ambiguity,’ it would be “an experience showing it’s possible to negotiate with them [the West] on other issues.” Instead, Trump accepted the recommendation of Israel Prime Minister Benjamin Netanyahu and Saudi Arabia, and made the United States the only side to leave the agreement. This decision has only deepened the mistrust and killed any chance of further engagement.

At this stage, two elements will play a key role in the future of Iran’s relations with the Western and Eastern blocs.

First, Russia, China, and even Europe want to keep the JCPOA going. The problem for the Europeans is that they are vulnerable to secondary U.S. sanctions if they continue to do business with Iran. The powerful countries in the East, however, will use the vacuum that Trump created to advance their own relationship and unity with Iran. Nevertheless, to maintain relations with the West, Tehran is weighing if Europe will be able to act independently and support the JCPOA without U.S. participation.

The second element concerns the possibility of direct U.S.-Iran negotiations under the Trump administration. Trump’s strategy is to destroy the JCPOA, pressure Iran through sanctions, and then try to reach a “better” deal with Iran. He has argued that Iran will reach out to him and ask for further negotiations. Mahmoud Vaezi, President Rouhani’s chief of staff, responded by saying that Trump tried eight different times to speak with Rouhani. Nevertheless, Ayatollah Khamenei, who is the final arbiter of Iran’s foreign policy, recently stated that Iran will not negotiate with the United States at any level.

In my 30 years of service for the Iranian government since the Islamic Revolution of 1979, I have consistently witnessed that the U.S. policy of insulting, belittling, bullying, and coercing Iran has backfired. It has only created a harder line within Iran, which will nullify any further negotiations with Washington. Although Iran’s relationship with the Eastern bloc improves as Iran’s relations with the Western bloc weakens, Trump and the United States—as well the JCPOA—will still play critical roles in Iran’s future.

The current trajectory of Trump’s policies will undermine the U.S.-led global order. U.S. sanctions against Russia, Iran, and Turkey will further increase the alignment of these countries as well as cooperation with eastern bloc powers such as China and India. Such a trend can lead to the end of the six-decade-long US hegemony in the region.

Ambassador Seyed Hossein Mousavian is Middle East Security and Nuclear Policy Specialist at Princeton University and a former spokesperson for Iran’s nuclear negotiators. His nuclear book, The Iranian Nuclear Crisis: A Memoir, was published in 2012 by the Carnegie Endowment for International Peace. His latest book, “Iran and the United States: An Insider’s view on the Failed Past and the Road to Peace” was released in May 2014.