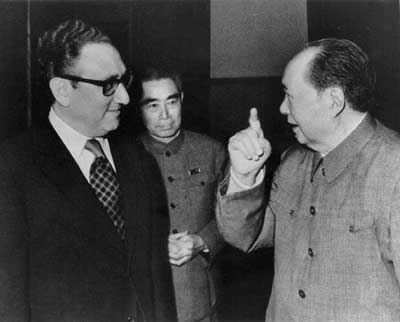 Former Secretary of State Henry Kissinger has written at length (Washington Post, November 18th – Job One Abroad: Iran) on Iran’s progress toward a military nuclear capability and, in brief, on what to do about it. His suggestion is for “a creative diplomacy, allied to a determined strategy.” But precisely what?

Historic parallels are always imprecise. But 40 years ago, the United States was in confrontation with the Soviet Union, in the midst of history’s most complex and potentially deadly arms race.

Yet the US government, matched by the Soviet Union, found ways to prevent a collective falling-off of the cliff of nuclear cataclysm.

1972 was notable for several developments, including the Anti-Ballistic Missile Treaty, which provides no precedent in today’s standoff with Iran. But a less-remembered diplomatic agreement does: the Incidents at Sea Agreement, whereby the two superpowers agreed on means to prevent a possible collision or other confrontation at sea from escalating to something far worse. Today, the parallel is in the Persian Gulf and more particularly, the Strait of Hormuz. All countries, including the US and Iran, have a vital interest in the free flow of commerce, especially oil commerce. All have an interest in reducing risks of unintended escalation. The risks are exacerbated by the heavy presence of US warships in the Gulf, although the plethora of US military power elsewhere in the region is surely sufficient to show resolve both to Teheran and to Gulf Arab states. The reported Iranian effort to shoot down a US drone last month could have escalated, had steady US nerves not prevailed.

As far as one knows, nothing akin to the Incidents at Sea Agreement has been proposed to Teheran, nor has its complementary interest of stability in Afghanistan, or its cooperative role in countering piracy in the Arabian Sea, been formally embraced.

More broadly, by 1972 the US was fully committed to direct, bilateral talks with Moscow, which it still abjures, today, with Teheran, and has done for decades. Further, at the beginning of 1973, NATO and the Warsaw Pact began talks on Mutual and Balanced Force Reductions (MBFR), which recognized the risks of potential conventional force instabilities in a heavily-armed region — a good parallel with the vast overarming of all parties in the narrow confines, short-distances, and high performance weapons of the Persian Gulf region. That year the Conference on Security and Co-operation in Europe (CSCE) was also convened, resulting two years later in the Helsinki Final Act. Arguably, this agreement made a significant contribution to the eventual hollowing out of the Soviet empires (especially in Eastern Europe) and an end to the Cold War.

Collectively, this diplomacy became known as detente, one of the great successes of US diplomacy in the last half century.

All these efforts were premised on growing awareness, at a time of mutual hostility and risks of war that neither side could hope to escape unscathed, that each had to understand the other’s fears and take a major measure of responsibility for the other’s security. That was the essence of mutual deterrence (Mutual Assured Destruction).  Obviously, even a nuclear-weapons-armed Iran would be no match for either the United States or Israel, each with its nuclear arsenal, but there would still be a form of mutual deterrence: in the sense that even a single Iranian nuclear weapon could threaten Israel’s very existence. Hence, pledges by both US presidential candidates to do whatever is needed to keep Iran from crossing a so-far imprecise “red line.”

Yet the United State has never been ready clearly to say that, even if Iran were to do everything that we want of it, we will recognize its legitimate security interests, much less offer it guarantees against attack, as the last Bush administration did with North Korea. Henry Kissinger sees that recognition not as something to be declared up front, as in the Cold War, but only after Iran “accepts enforceable verification.” Elementary strategy analysis and a vast history of statecraft argue that that course cannot succeed.

Kissinger is surely right that “Iran [needs to show] willingness to conduct itself as a nation-state, rather than a revolutionary religious cause.” And maybe Teheran would not respond positively, whatever we do. But in trying to move Iran in that direction and toward ending nuclear risks in the Middle East, there is clear precedent from the Cold War: intelligent US diplomacy, then crafted and led in major part by the National Security Advisor and later Secretary of State, Henry A. Kissinger.