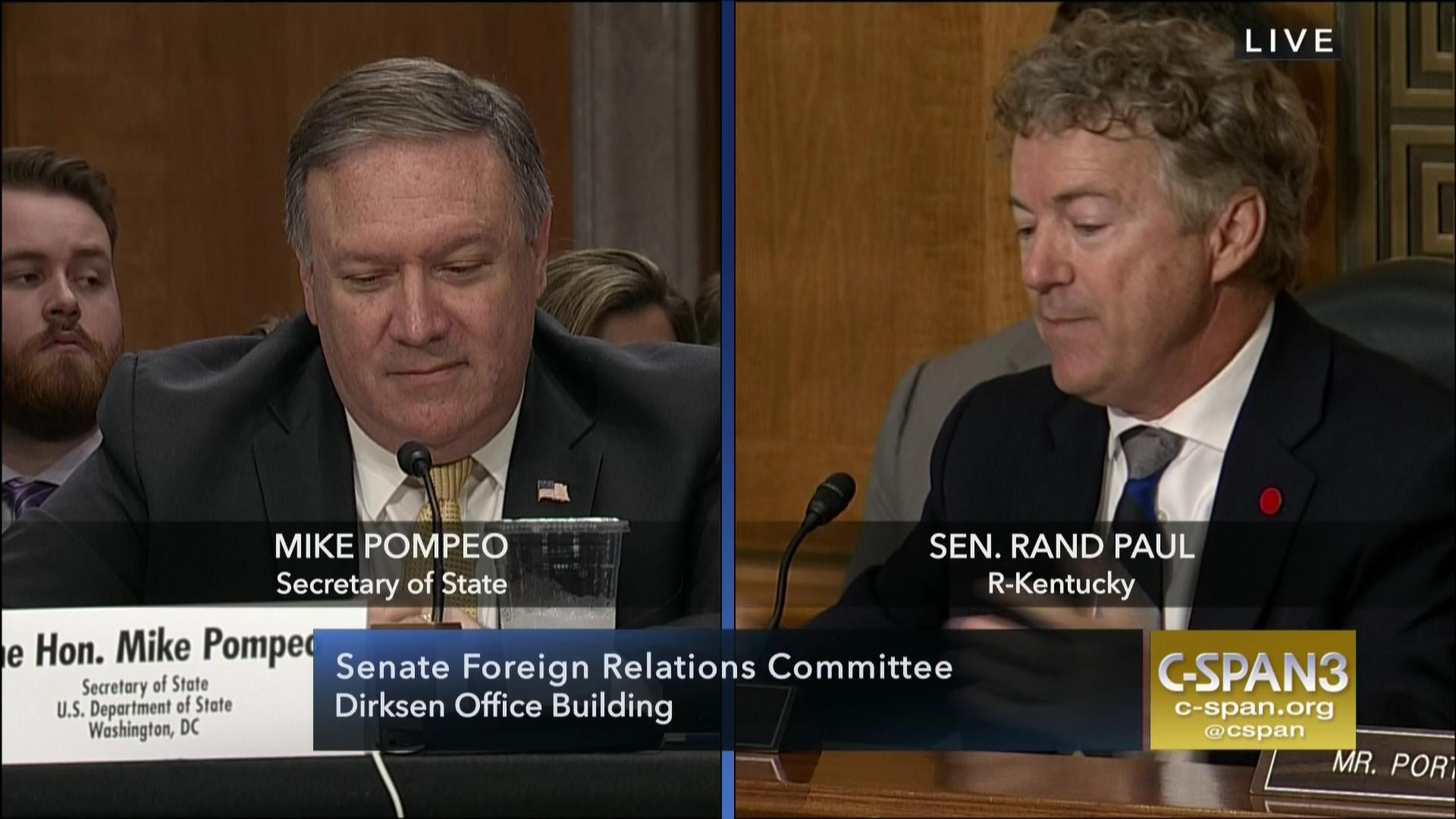 Secretary of State Mike Pompeo pushed the Trump administration’s campaign for regime change and possible war with Iran during a Senate hearing on Wednesday by continuing to promote a dubious link between Iran and al-Qaeda. In turn, he refused to rule out whether the 2001 congressional authorization for war in Afghanistan could be used to justify war with Iran.

When asked by Sen. Rand Paul (R-KY) whether the 2001 Authorization for the Use of Military Force (AUMF) applies to Iran or the Iran Revolutionary Guard Corps, which the Trump administration this week controversially labeled a terrorist organization, Pompeo demurred.

“I’d prefer just leave that to lawyers, senator,” Pompeo replied, even though he went to Harvard Law School and worked as a lawyer at a prominent Washington, DC law firm upon graduation.

“But you’re unwilling to state unequivocally that…Iran had something to do with the attacks on 9/11?” Paul then asked.

“The legal question I’ll leave to counsel,” Pompeo said, claiming though, that Iran’s connection to al-Qaeda “is very real.”

Pompeo first promoted this bogus claim of strong links between al-Qaeda and Iran when he was CIA director. The claim is seemingly part of the Trump administration’s wider years-long effort—which has included withdrawing from the Iran deal, ramping up bellicose rhetoric, and goading Iran into violating the nuclear agreement—to put the United States back on a path to war.

But not only is the connection between al-Qaeda and Iran weak, the suggestion that the 2001 AUMF would therefore apply is complete nonsense.

A 2012 report by the Combating Terrorism Center at the United States Military Academy at West Point found that the relationship between al-Qaeda, a Sunni terrorist group, and Iran, led by Shiite clerics, is “not one of alliance” but “highly antagonistic” and “largely based on indirect and unpleasant negotiations over the release of detained jihadis and their families, including members of Bin Laden’s family.”

And a study last year by the New America Foundation came to a similar conclusion. It found “no evidence of cooperation…on planning or carrying out terrorist attacks” between Iran and al-Qaeda and that any cooperation or relationship was one of either expediency or calculation.

When Pompeo first floated this link back in 2017, experts at the time said that they’ve “never seen any evidence of an active collaboration,” dismissed the connection as an “oversimplification of the facts.” They said that any relationship between Iran and al-Qaeda has largely been “an on-again, off-again marriage of convenience pockmarked by bouts of bitter acrimony.”

Given that the al-Qaeda-Iran connection isn’t what Pompeo and Team Trump are making it out to be, and they have offered no proof that Iran had anything to do with 9/11, the 2001 AUMF in turn has nothing to do with Iran.

Even granting some of the Trump administration’s claims—for example, that al-Qaeda operatives are living in Iran—Steve Vladeck and Tess Bridgeman of Just Security note, that “it’s questionable whether the 2001 AUMF would apply to a country harboring AQ today, as opposed to a country that ‘harbored’ (past tense) those groups on or before 9/11, the clear intent of the statutory authorization.”

During Wednesday’s hearing, Sen. Paul agreed. “I don’t think that dog hunts very well,” he said, referring to Pompeo’s claim of “very real” links between al-Qaeda and Iran. He added:

Indeed, Congress has not given any authorities for Trump to start a war with Iran. In fact, just this month, a bipartisan group of senators (including Paul) led by Sen. Tom Udall (D-NM) introduced a bill that actively forbids the White House from starting a war with Iran without congressional approval.

Pompeo’s remarks are indeed troubling, as Paul noted, not only because of the signal they send about U.S policy, but also because of the relatively little attention they have received.

Normally, a very senior U.S. official leaving the door open for another major war in the Middle East, using the same exact logic the George W. Bush administration used to sell the war in Iraq, would be major topic of conversation. Although news outlets did pick up the exchange between Paul and Pompeo, its Trump-era newsworthiness has been quite limited. Pompeo’s remarks, for instance, were featured in a story on page A8 in today’s New York Times.