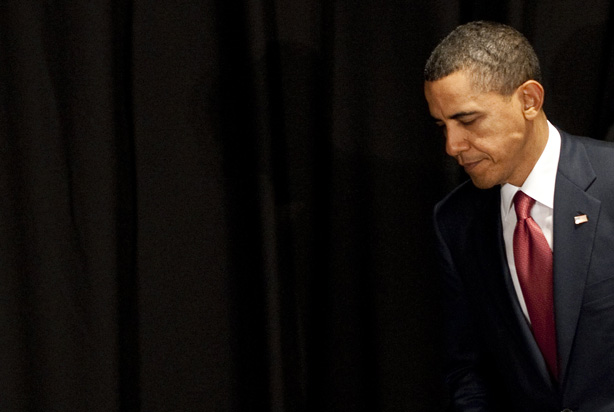 As suggested most recently by Stephen Walt, a regrettable and recurring theme of the Obama Administration’s foreign policy in the Gulf and the Middle East over the last four years has been the lack of any sense of strategic priorities or objectives in the region. What lies ahead for the president’s second term?

I wish I thought that the administration had (gasp!) actually examined the possibility of containment (remember the strategy that won the 50-year Cold War?) as a viable strategy both to convince Iran not to build its own nuclear weapon and/or deal with the Islamic Republic if it does cross the nuclear threshold.

But “containment” has now become a watchword for those concerned about the political correctness surrounding the terminology we are supposed to use to discuss strategy and policy options to achieve related objectives. Actual strategist Zbigniew Brzezinski was himself loathe to even mention containment during a recent speech about Iran because it’s becoming such a loaded political term.

The unfortunate truth is that this country can’t have any kind of real and informed opinion about whether to go to war with Iran until it decides on its strategic objectives and is prepared to subject its strategy to open and transparent debate in the marketplace of ideas. There was once a day when the Senate Foreign Relations Committee actually served this purpose. Imagine that!

Instead, we are today left with the Israeli lobby and its acolytes proclaiming a coming day of doom if Iran gets the bomb and the marginalization of commonsensical arguments from people like Walt and Paul Pillar who are asking the basic questions about strategic objectives that should be answered before the United States decides to go to war with Iran.

And, we are left with the Iraq war model in which attempts are simply made to present a case that war is somehow inevitable. Even more disturbingly, we are left with a legislative branch that seems mindlessly bent on pushing the country down the path to war, step by step, with its ever-tightening noose of sanctions that only increase the chances of war and Iran deciding that it has no choice but to build its own bomb.

In this void of strategic thinking, the Obama Administration seems to trundle along managing the inbox in a haphazard and unpredictable way.

Syria burns; the Israelis tell the US to get stuffed once more while fully ready to jam a JDAM down the throat of anyone that sneezes in their direction; Egypt could be descending into a dictatorship; Bahrain and the Gulf States teeter; Iraq falls into Iranian orbit — and that’s just the beginning.

But what is the Administration really worrying about, according to the press? Who exactly makes it onto the drone strike joint prioritized effects list (those to be assassinated). If ever there was a tactical problem in searching for a strategy, it is this issue — strategy turned on its head. How the president found himself picking out and/or participating in the monthly target list meetings (reminiscent of President Johnson in the 1960s) is frankly mind-blowing, but says a lot about the lack of strategic direction for a country that is still the leader of the free world.

How do we explain this lack of direction? It’s easy to blame advisers on the National Security Council who are not strategists and the fact that we are now “between” new cabinet secretaries. It’s easy to blame our regional brain lock by the Israeli lobby. It’s easy to blame a disinterested public and their elected representatives. All of these have in some way contributed to the current state of affairs in which a straightforward and commonsensical argument by a Stephen Walt vanishes into the proverbial wind. This is all true — except that it’s been a hallmark of the last four years. The US has essentially “made it up” as it went along.

I wish I could say that I thought the next four years would be different, and I fear for the future and the prospect of more ill-advised wars started for spurious and stupid reasons that are disconnected from well thought out strategy and policy.