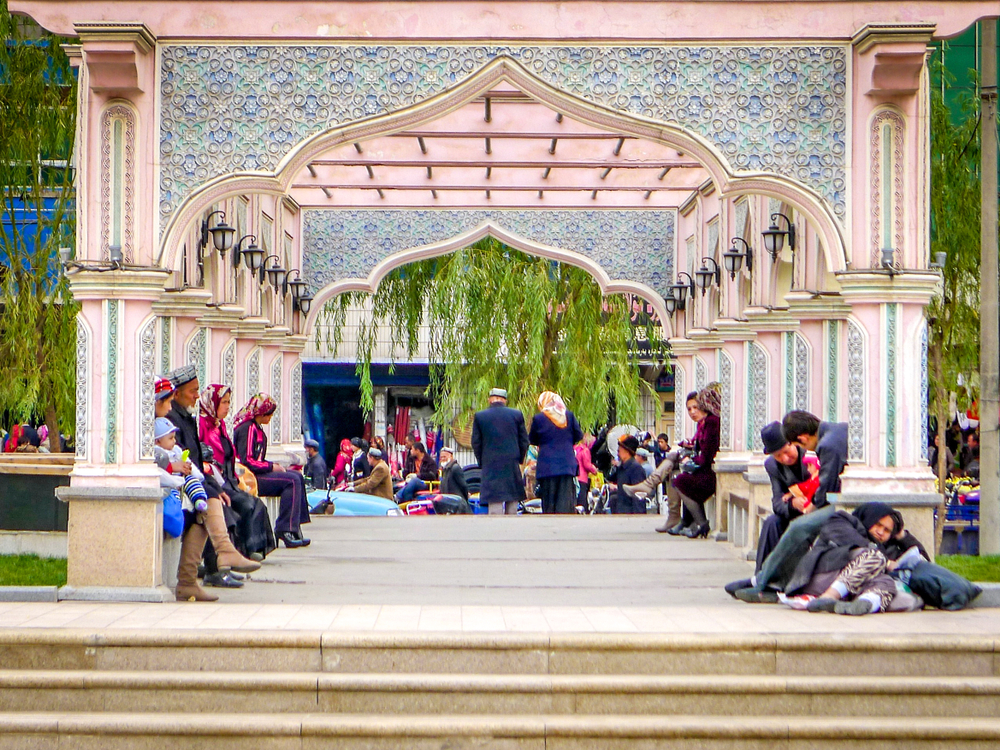 Uyghurs in a market in Kashgar, Xinjiang (Kylie Nicholson / Shutterstock.com)

A disagreement between major Indonesian religious leaders and the government on how to respond to China’s crackdown on Turkic Muslims raises questions about the Islamic World’s ability to sustain its silence about what amounts to one of the most concerted assaults on the faith in recent history.

Rejecting a call on the government by the Indonesian Ulema Council, the country’s top clerical body, to condemn the crackdown that has seen up to one million Turkic Muslims detained in re-education camps in China’s north-western province of Xinjiang, Indonesian vice-president Jusuf Kalla insisted that the government would not interfere in the internal affairs of others.

The disagreement could take on greater significance after elections in April next year which incumbent president Joko Widodo is expected to win. Mr. Widodo’s vice-presidential running mate, Ma’ruf Amin, is the ulema’s council’s chairman. Since joining the presidential ticket, Mr. Amin has retained his council position as non-active chairman.

Nonetheless, eager to attract Chinese infrastructure investment, Mr. Kalla’s position is in line with a majority of Muslim countries, who have opted to remain silent in a bid not to jeopardize relations with the People’s Republic even if many of them have responded angrily to far less threatening incidents such as the condemnation of British writer Salman Rushdie for his novel, The Satanic Verses; the cartoon depiction in Denmark of the Prophet Mohammed; and the burning of a Qur’an by an American pastor.

In a similar vein, Mushahid Hussain, chairman of Pakistan’s Senate Foreign Affairs Committee, said the cardinal principle of Pakistan-China relations was to refrain from commenting on anything to do with another other country’s domestic issues even though some 200 small Pakistani businessmen have been campaigning for the release of their Uyghur spouses from Chinese camps and either the  lifting of travel bans on their children or being allowed to visit them.

“Given the relationship of Pakistan with China, and in the Muslim world in particular, the Chinese narrative is apparently being accepted across the board as the one that is correct,” Mr. Hussain told Associated Press.

By the same token, Turkey with its ethnic and cultural links to China’s Turkic Muslims and past support for Uyghur aspirations has adopted a similar attitude as Chinese investment and financial aid expands.

With the exception of a few protests in Bangladesh and India and critical statements by Malaysian leaders, Muslims across the globe have largely refrained from pressuring their governments to speak out about developments in Xinjiang. If anything, China retains its status of Asia’s top tourism destination for Muslim travellers.

Nabeel Shariff, founder of UK-based halal holiday company Serendipity Tailormade, struggled with the ethical aspects of promoting Muslim tourism to China, but concluded that “In a way, it makes sure the Uygur community are not forgotten.”

Mr. Shariff’s justification notwithstanding, there is little public evidence of the plight of China’s Turkic Muslims being in the Muslim public eye. Muslim and Chinese leaders appear to be betting that the silence is sustainable. That threatens to be a risky strategy.

For one, the crackdown in Xinjiang is expanding to the Hui, China’s non-Turkic Muslims. The autonomous region of Ningxia Hui recently signed a cooperation agreement on anti-terrorism with Xinjiang in a bid to learn from the crackdown on the Turkic Muslims or in the words of the Global Times, a Communist Party organ, “to learn from Xinjiang’s experiences in promoting social stability.”

Mounting Western criticism of the crackdown, that is toughest on Muslims, but also targets other religious groups, including evangelists, puts Muslim nations on the spot. The criticism is likely to lead to Western companies boycotting products made in Xinjiang by inmates of the re-education camps, which China describes as institutions for vocational training, or people who were recently released but forced to work in factories associated with the crackdown.

An Associated Press investigation published this week tracked the shipment of sportswear from a factory linked to the camps to Badger Sportswear in the United States that supplies university bookshops and sports teams around the country. “We will voluntarily halt sourcing and will move production elsewhere while we investigate the matters raised,” said Badger CEO John Anton.

A potential black swan is anti-Chinese sentiment in a number of Muslim countries, some of which have ethnic links to China’s Turkic Muslims, as a result of perceptions of Chinese commercial terms for project finance and loans associated with the People’s Republic’s infrastructure-driven Belt and Road initiative that are perceived to be debt traps.

In an illustration of the risk, Kunaysh Sultanov, a member of the Kazakh parliament and former deputy prime minister and ambassador to China, took issue with the government’s walking a tight rope, attempting to balance its relations with its need to stand up for the rights of Kazaks.

“There should be talks taking place with the Chinese delegates. Every delegation that goes there should be bringing this topic up… The key issue is that of the human rights of ethnic Kazakhs in any country of the world being respected,” Mr. Sultanov said after a Chinese camp worker of Kazakh descent who had escaped to the Central Asian republic testified in court about what she had witnessed.