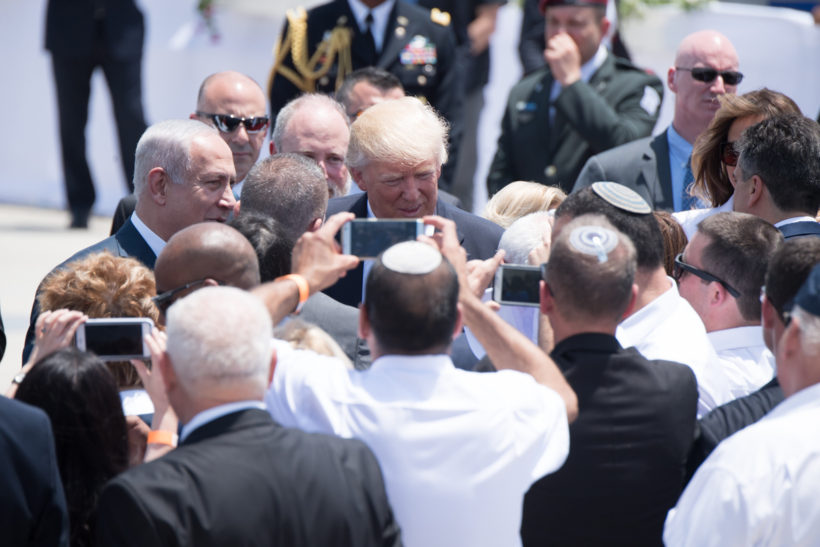 If we’ve learned anything about President Donald Trump it’s that for him words have no meaning, or at least not their obvious meaning. Because he’s a performer/salesman, he loves being on stage, knowing that the things he says will get a reaction.  In many instances he’ll say something to shock, knowing that it will cause a distraction that can divert attention from something else. As a result, when I hear Trump make some outrageous remark at a rally or in a tweet, or appear to break new ground at a press conference—instead of taking it at face value—I first ask the question, “Why did he say that?”

This being the case, when I heard Trump this past week twice make reference to a two-state solution to the Israeli-Palestinian conflict, I didn’t get excited, as did some Israeli commentators on the right and the left. I took it with a grain of salt, trying to figure out what game was being played.

Later, at another press event, in remarks that were rambling and at times incoherent, he said,

I think we’re going to go down the two-state road, and I’m glad I got it out… You know what I did today? By saying that I put it out and if you ask most people in Israel, they agree with that, but nobody wanted to say it. It is a big thing that I put it out. Now the bottom line, if the Israelis and Palestinians want one state, that’s okay with me. If they want two states, that’s okay with me. I’m happy if they’re happy. I’m a facilitator… I think probably two states is more likely…

I think it is in one way more difficult because it is a real estate deal because you need metes and bounds and you need lots of carve-outs and everything. It’s actually a little tougher deal, but another way it works better because you have people governing themselves.

What, you may rightly ask, was he trying to say? On the one hand, nothing earth shattering. Trump gave no indication that what he was supporting could be construed as fulfilling the Palestinians’ minimum requirement of an independent sovereign state based on the 1967 borders with its capital in East Jerusalem.

As Netanyahu made clear, shortly after Trump’s remarks, “Everyone defines the term ‘state’ differently. I am willing for the Palestinians to have the authority to rule themselves without the authority to harm us.” In line with that, Netanyahu insisted that Israel would never surrender security control of all the territories “west of the Jordan River”—a concern, Netanyahu said was understood by the US president. Speaking the next day, US Ambassador to Israel, David Friedman, added “Where Palestinian autonomy and Israeli security intersect, we err on the side of Israeli security.”

If anything, what Trump’s vague two-state framework suggests is more reminiscent of Menachem Begin’s Camp David plan for Palestinian Autonomy—a situation in which self-governance meant that Palestinians would control themselves and their domestic needs, but would not control land, resources, or borders and security. These are reserved for the Israelis.

Seen in this light, Trump’s intention was not to break new ground, but rather to resurface and try to breathe new life into an old and discredited approach by calling it a “two-state solution.” If it meant so little, then why did President Trump throw out these words at this time and in this way?

In the first place, it was not an inadvertent slip of the tongue. This was deliberate. Since he repeated it over and over again, the phrase was obviously in his talking points. And because he boasted that saying it “is a big thing”, he clearly wanted it to be noticed and cause a reaction.

Calling for “two states” was not intended to embarrass Netanyahu or push him to make concessions to the Palestinians. Nothing in Trump’s body language or in the rest of his love-fest with the Israeli leader would lead to that conclusion. And nothing in recent US policy actions (moving the Embassy to Jerusalem, cutting aid to UNWRA and the Palestinian Authority, and their announced intention to redefine who is a Palestinian refugee, and efforts to delegitimize the PLO) or inaction (refusal to speak out against massive settlement construction and the demolitions of Palestinian homes and villages) would suggest that this Administration was tilting in a pro-Palestinian direction.

It seems safe to say that the mention of two-states, at this time, was said more for affect than as a serious recognition of Palestinian rights. But toward what end?

It might have been intended to make it appear that the long awaited (but no longer highly anticipated)  “ultimate deal” was still worth waiting for. Or it might have been designed to deflect from the anticipated lambasting that the Trump administration was sure to get (and, in fact, did get) in PA President Mahmoud Abbas’ speech before the General Assembly. And it might also have been hoped that by throwing out this mention of “two states” he might calm nervous Arab allies, all of whom Trump acknowledged at his press conference had repeatedly told him that solving the Israeli-Palestinian conflict was key to establishing regional peace.

And so, always the master of deflection and using a salesman’s “pitch” to create attention, Trump used the lure of the two-state solution in an attempt to make news. In this, however, he didn’t succeed. His words were condemned by the Palestinians and ignored by most Arabs. It appears that the “threat of two states” only really created a bit of a sensation in Israel where one of Netanyahu’s governing partners threatened to bolt if a Palestinian state came into existence. He was quickly calmed by Netanyahu’s reassurances.

In the end, it appears that the news that Trump hoped he’d get, turned out to be no news at all.