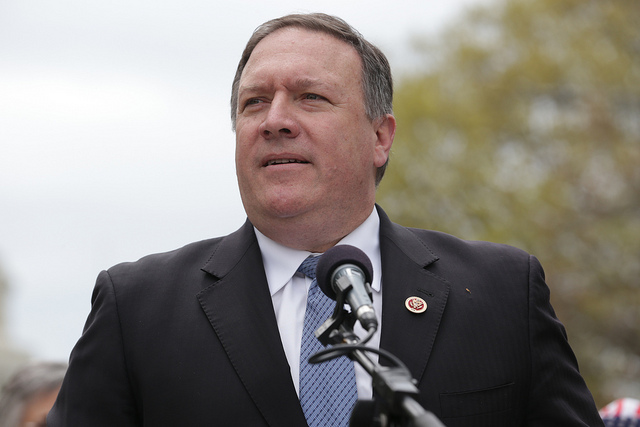 As Mike Pompeo’s confirmation vote in the Senate Foreign Relations Committee teeters on the brink of rejection, hawks eager to salvage his confirmation on the Senate floor are pushing an interesting argument: that only Pompeo can “save” the Iran nuclear deal (the Joint Comprehensive Plan of Action or JCPOA). This is like arguing that only the hamburglar can protect your Big Mac.

How could we expect Pompeo to save the Iran deal as secretary of state when he already worked to sabotage the deal as CIA director, a position supposed to be non-political? Contrary to promises of objectivity during his nomination hearing, as CIA Director Pompeo pushed the president to de-certify the Iran nuclear deal despite Iran’s continued compliance. According to a Foreign Policy report in July:

Although most of Trump’s deputies endorsed certifying that Iran was abiding by the deal, one senior figure has emerged in favor of a more aggressive approach—CIA Director Mike Pompeo. At White House deliberations, the former lawmaker opposed certifying Iran while suggesting Congress weigh in on the issue, officials and sources close to the administration said.

Pompeo was forced to acknowledge Iran’s compliance when, despite the full resources of the CIA at his disposal, he failed to find any evidence that Iran was not abiding by the deal. As he stated in his confirmation hearing last week, “I’ve seen no evidence that they’re not in compliance” with their obligations under the nuclear accord. That means that Pompeo was urging Trump to make a political decision to undermine American compliance with the nuclear accord and push the U.S. government to exit the deal, which was widely denounced by all other parties to the agreement. There’s no reason to expect Pompeo to change if he becomes secretary of state.

Furthermore, Pompeo has refused to assure senators that he would stand in the way of Trump walking away from the accord if an agreement with the Europeans is not forthcoming in less than a month. Many have fixated on Pompeo’s promise to try to “fix” the accord by May 12 in line with Trump’s directives. Yet, when pressed on what he would advise if an agreement is not forthcoming by the deadline—an increasingly likely scenario—Pompeo affirmed that he would let Trump snap back sanctions to kill the deal and then work for a “better deal.” Of course, the notion that there is a “better deal” coming after Trump abrogates the current deal and alienates U.S. negotiating partners is ridiculous. Pompeo would be letting the deal he hates die, not putting himself on the line to save it.

Then there’s Pompeo’s record as a member of Congress. Pompeo pushed 2,000 bombing sorties on Iran as an alternative to nuclear negotiations in 2014, routinely asserted that there were no benefits to the nuclear accord whatsoever, and suggested that the U.S. pursue regime change in Iran. That record has rightfully raised concerns among lawmakers questioning Pompeo’s record.

Yet, similar to his peddling of conspiracy theories over the Benghazi tragedy, Pompeo distinguished himself by launching disingenuous attacks on the nuclear deal along with his buddy Sen. Tom Cotton (R-AR). In summer 2015, Pompeo and Cotton met with the International Atomic Energy Agency (IAEA) in Austria for briefings on a confidential, technical implementation plan to resolve an inquiry into Iran’s past nuclear activities with possible military dimensions. Such inspection plans are routinely kept confidential to protect state confidentiality and preserve the IAEA’s reputation as a neutral arbiter. Rather than educate their fellow lawmakers, Pompeo and Cotton spun the plan as a “secret side deal” that Obama was withholding from the American public. The House of Representatives even passed legislation authored by Pompeo alleging that Obama had broken the law by failing to turn over the confidential plan and that the JCPOA was therefore void. Interestingly, a recent White House news clip cites an op-ed listing the side-deal episode as a reason to support Pompeo, rather than as a sign that he is politically toxic and has a history of playing loose with the facts.

Pompeo’s primary qualification for secretary of state is that he has Trump’s ear and that, because of his good working relationship with the president, his word will carry weight. But Pompeo won’t likely reverse years of advocacy against the Iran nuclear deal, particularly absent any serious assurances from the man himself.