You would never know I am an urgent, existential issue threatening human civilisation at the U.N. climate summit here in the final week in Doha. It is more like a trade negotiation, where hard-fought agreement to change the word “shall” to “may” in a document is considered progress.

Victory here is to change a word, not the world.

Three years ago, more than 100,000 people marched through the streets of Copenhagen during COP15 shouting “System Change, Not Climate Change!” There is not even a whisper of that call here at COP18.

Outside the security barriers, the Qatari capital of Doha, one of the world’s most energy-profligate cities, ignores what’s going on inside COP18. There was a march on Saturday, the first ever in the city, apparently. Three hundred mainly young people marched asking Arab nations to lead in taking action to reduce fossil fuel emissions.

Marchers were careful not to say “system change” in a country where a poet was jailed for life only two days before. He had written a poem deemed insulting to Qatar’s Emir, the ruler of this country built on gas and oil.

And yet “system change” is clearly what you need. Your global economy is based on fossil fuels that put more than 30 billion tonnes of carbon dioxide (CO2) into the atmosphere every year. It is this carbon pollution that makes me ever more powerful. And don’t forget your carbon footprint will be cooking the planet long after you are gone. What will your grandchildren and great-grandchildren think of the way you spent your life? 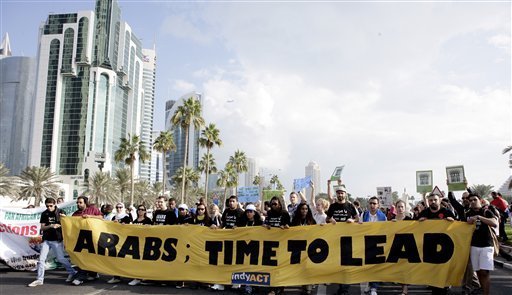 No one wants to leave this awful legacy. So why is there so little change? Coal, gas and oil companies represent the richest and most powerful industry ever. If they don’t want change, nothing will change. After 18 years of U.N. climate negotiations, humanity is still increasing CO2 emissions. In fact, emissions will reach yet another record high in 2012.

Nothing here at COP 18 will prevent 2013 from setting another record for CO2 emissions.

The U.N. climate negotiations may be the most complex and difficult ever attempted, but all that is being decided is who will do what, by when and who will pay. Everyone here knows the real problem is a “lack of political will”. Political will is not at COP 18, it resides in national capitals. And that’s where fossil fuel interests are most at home.

I am not a science problem, or a technical issue or even an economic challenge. My growing power is a failure of democracy. The interests of a few are trumping the welfare of the many – and the welfare of seven generations to come.