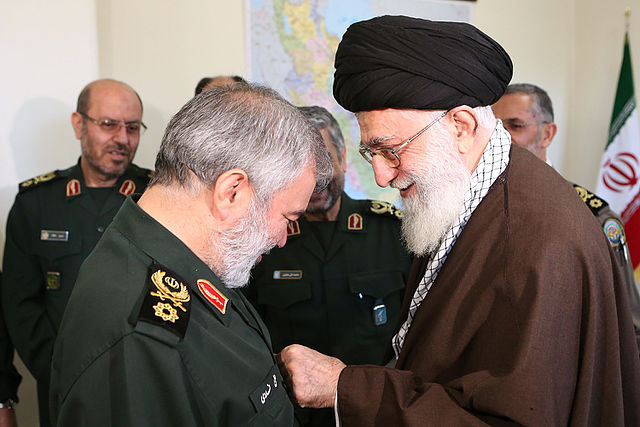 Ayatollah Khomeini once declared that if it weren’t for the Islamic Revolutionary Guard Corps (IRGC), there would be no revolutionary Iran. In many ways, he was right. From its humble roots among disorganized militias fighting the Shah, the IRGC has been at the heart of almost every major historical turn in Iran’s modern era. It defended the homeland against Iraqi invaders and then reconstructed the country’s bombed-out infrastructure and economy. It cowed reformists into submission to the Islamic system. Now, it’s spearheading a campaign to rebuff Sunni rebels in Iraq and Syria, which will have regional consequences for decades to come.

In his book, Vanguard of the Imam, Iran scholar Afshon Ostovar paints a thorough and comprehensive picture of the Guard’s role in forming the modern Iranian state. “Without it, the Islamic Republic would not have developed as it has nor function as it does,” he writes. Any cursory overview of Iran’s distribution of power shows why this is so. As the backbone of regime security, the Guard is presumed to have the supreme leader’s guaranteed backing; as Iran’s most potent military force, it lays claim to far more battlefield experience and higher-tech equipment than the conventional Artesh; and as a savvy political operator, it controls untold swaths of the national economy.

The Guard is first among equals in the constellation of power centers that make up the Iranian state. But how it chooses to use that position of prestige remains surprisingly murky. To many, it is the implacable enemy of a regional order led by the United States and upheld chiefly by the Saudis and Israelis.

This is the official view of the U.S. government, which in 2007 designated the Guard a terrorist entity through an act of Congress. It stopped short, however, of putting the Guard on the State Department’s terrorist blacklist, a move that would expose it to sanctions. President Barack Obama famously broke with the “Washington playbook” in pursuing a diplomatic settlement over Iran’s nuclear program and charting a more restrained course in Syria. But where he put down the old playbook, his successor, Donald Trump, has enthusiastically picked it up. One month into the new presidency, Secretary of Defense James Mattis reasserted the old line that Iran is the world’s “biggest state sponsor of terrorism.”

Such blanket declarations don’t do much to aid an understanding of why the Guard acts the way it does or how it might act in the future. If terrorism is its overriding project, and that terrorism is aimed at U.S. interests and allies, then is the Guard nothing more than a governmental Islamic State? As uninformed observers sometimes crow, Iran is even more dangerous than the Islamic State. A related view of Iran, first posited by Henry Kissinger, is that it is a “cause”—dedicated to the destruction of world order—and not a proper “nation.” But even that assessment was axed from the first draft of Trump’s Nowruz address for being too conciliatory.

In Vanguard of the Imam, Ostovar proposes a radically different way of looking at the Guard. “The IRGC has been viewed primarily as an ideological military. This perception is not incorrect, but it fails to adequately describe the organization,” Ostovar writes in the introduction, setting the tone for the rest of the book. Although he doesn’t attempt to diminish the importance of ideology, his central argument is that it has mattered less to the organization’s development than have two other, largely overlooked factors: first, the role of conflict in shaping the Islamic Republic’s history, and by extension the Guard’s; and, second, the deeply rooted historical context from which the Guard emerged.

Ostovar contends that it’s impossible to understand the Guard without recognizing the primacy of conflict. Conflict is not only how the Guard developed an extensive institutional apparatus, but it also proved necessary to the Guard’s survival as a self-identified revolutionary force. From the outset, the Guard defined itself in contrast to an endless slew of enemy forces, both physical and spiritual, to Iran’s Islamic culture. “This dynamic of conflict–militating against the amorphous threats to Islam–is what has defined the IRGC’s mission of safeguarding the revolution,” Ostovar writes.

He uses this dynamic as the organizing principle for the book, sketching all of the Guard’s major confrontations against enemies within and without, from ethnic insurrectionists to Baathist invaders to reformist subversives. For the bulk of the book, Ostovar gives a comprehensive account of this history. Although certainly eye-opening for the novice, it borders on the perfunctory for a better-informed reader, were it not for Ostovar’s other theoretical argument, which he weaves into the subsequent narrative.

Far from simply materializing from the ether of Ayatollah Khomeini’s revolutionary sermons, the Guard has two historical “precedents” that go a long way toward illuminating its role within the state. One of these precedents is “pro-clerical activism,” which provided Khomeini with his own base of popular support and impelled him to form the Guard as a way of centralizing this religious practice. The other is an ancient mode of political formation called comitatus, vestiges of which live on in the Guard’s relationship to the supreme leader.

Ostovar explains that Shi’a clergy have always enjoyed the support of local devotees who do their bidding: “These pressure groups could advocate for their cleric, his rulings, help collect his taxes, or even act in his honor.” In the 19th and 20th centuries, this relationship intensified, with cleric-aligned gangs using “acts of protest–including physical violence and intimidation–as methods of coercion to influence politics at the local and national levels.” During the revolution, Khomeini’s peers had their own local constituencies and militias, which might have had sympathies for him but not allegiance. Khomeini thus had an interest in uniting a critical mass of these militants under a single banner. “The IRGC became the superstructure by which the impulse of pro-clerical activism was harnessed,” Ostovar writes. “It legitimated this social and political function.”

Comitatus, which existed in Iran and Central Asia for millennia, refers to a political custom whereby a royal guard corps would serve their ruler with absolute loyalty, sometimes even committing suicide after his death. Under the Safavids, these guards became the ruler’s most trusted advisers, and he would lavish gifts on them to retain their loyalty. This relationship was heightened by what Ostovar calls “Perso-Shiite conceptions of divinity” by which the ruler served as “the Shadow of God on earth.”

Ostovar believes this historical model, while not replicated exactly by the Guard, has impressed upon it an incorruptible loyalty to the office of the supreme leader. The last major study on the Guard, Ali Alfoneh’s “Iran Unveiled: How the Revolutionary Guards Is Transforming Iran from Theocracy into Military Dictatorship,” argues that it has usurped the supreme leader’s position, quietly arbitrating Iranian politics in all but name. Ostovar flat-out rejects this thesis because it goes against the grain of such a deeply rooted practice as comitatus. “While the IRGC can exist in the absence of a particular leader, it cannot exist as it is currently structured in absence of the institution of the leader,” he writes.

The Guard’s development thus marks a continuation, not a rupture, with Iranian political and religious culture, according to Ostovar. The most stunning implication of this analysis is that, maybe, the Guard isn’t all that revolutionary. Ostovar refrains from pushing that button. Indeed, he limits his discussion of these “precedents” to a mere five pages, far from enough space to really question whether the revolution actually revived a desiccated “Perso-Shiite” tradition by combining the institutional memory of comitatus with the pro-clerical activism of the Guard.

Without saying it outright, Ostovar seems to suggest that these precedents govern the Guard’s institutional form, whereas its ideological and religious positions are flexible and context-dependent. “As a political organization, the IRGC’s religious views are as much a product of organic orthodoxy as of the navigation of context,” he writes, adding that ideology is also “subject to change over time.”

Ideological priorities may come and go, depending on what the supreme leader decides is in Iran’s best interest, but the Guard’s devotion to that system is indivisible. This insight should modify the claims of both analysts who claim it has monopolized power as well as those who question the seriousness of its “pro-clerical activism” abroad. In Syria, the Guard has spawned a number of proto-Hezbollah “resistance” formations among embattled Shia communities, promoting the just guidance of the supreme leader and extending the state’s power into an Arab heartland. Likewise, in Iraq, it is driving the institutionalization of a militia movement that is dominated by men who have long pledged their allegiance to the same leader.

As the Guard spreads its unique brand of leader-worship, one wonders, after reading Ostovar’s book, if what we’re seeing in Iranian foreign policy is less an ideological death-match against the United States than the modern resurgence of historical political forms that once gave the Persian Empire its might.