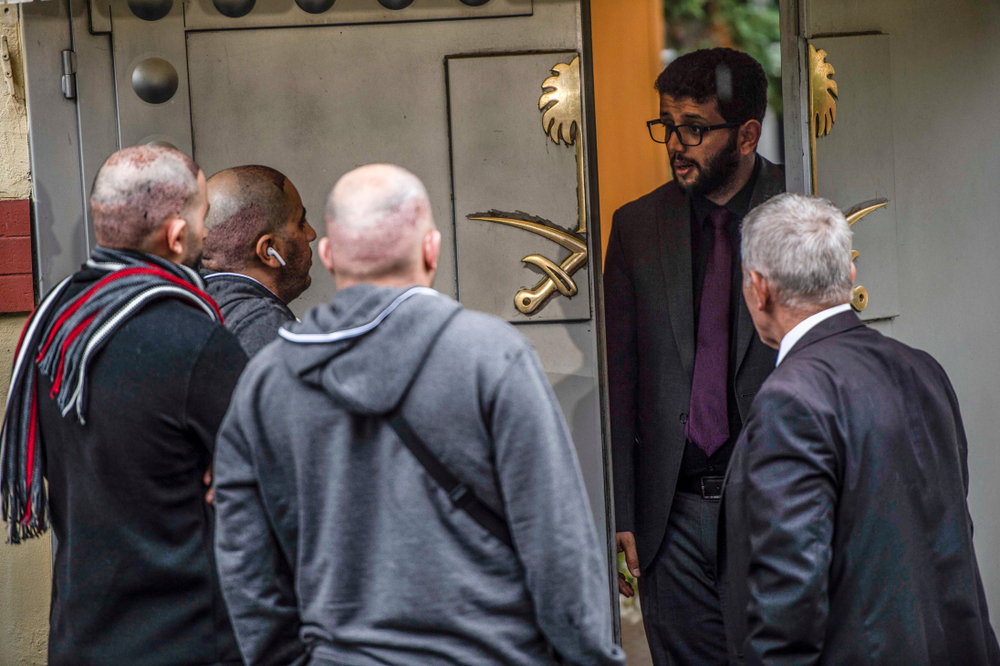 Outside the Saudi embassy in Istanbul (quetions123 via Shutterstock)

The shock of the brutal murder of Jamal Khashoggi is finally bringing U.S. Middle East policy out in the open, where it should be thoroughly examined for the first time in years.

The United States first struck a deal with the House of Saud in 1945 when, on his way home from Yalta, Franklin Roosevelt met with King Abdulaziz (Ibn Saud). With the onset of the Cold War, Saudi oil became steadily more important. Riyadh played the role of swing producer within OPEC. With some hiccups, notably the 1973 oil embargo during the Yom Kippur War, the Saudis dutifully supported US global interests in exchange for America’s underwriting the kingdom’s security. The relationship intensified following the 1979 Iranian Revolution and Iraq’s 1990 invasion of Kuwait, which posed tangible threats to Saudi Arabia and others. But the United States led a coalition to expel Iraq from Kuwait, and Iran’s export of revolution receded when it became clear that there were few takers for its Shia extremism.

The Iranian challenge assumed a new form after the United States led the 2003 invasion of Iraq, which shattered a minority Sunni government that for decades had ruled majority Shias and Kurds. This eliminated Iran’s key regional rival. The Saudis were thus driven to try redressing the balance, against both Iran and the region’s Shias, notably in supporting insurrection against Syria’s Alawite-minority government. They also they found common cause with Israel, which worried about nearby threats supported by Iran, primarily Hezbollah in Lebanon and, to a lesser extent, Hamas in Gaza.

The Israeli-Saudi bromance developed apace. Both sought to contain Iran, beginning with nuclear weapons but also Tehran’s aspirations for a wider Middle East role. Both wanted to undercut Palestinian hopes for an independent state. After 39 years of on-gain, off-again negotiations, Israel has no intension of reaching agreement with the Palestinians, while the latter haven’t been able to get their peace-process act together. For the Saudis and other Gulf Arab governments, support for the Palestinians has always been with crocodile tears.

The United States supported the budding Israeli-Saudi alliance against Iran, which began as shared concern over Iran’s nuclear program. But in 2015 the possibility of its building nuclear weapons was scotched for many years ahead by the Joint Comprehensive Plan of Action (JCPOA).

It soon became clear that Riyadh and Jerusalem were not primarily concerned by the nuclear Issue. Indeed, they both endorsed President Donald Trump’s abrogation last May of America’s JCPOA commitment. More basic goals shared by Jerusalem-Riyadh, in what is almost surely a temporary marriage, have been about Iran’s overall behavior, and they may even prefer that Iran cease to exist as one country. They have found a colleague in President Trump, who is bent upon eliminating the Iranian regime by crushing the country and its people economically— whether just as a bargaining tactic or as an actual goal.

Of course, while Trump is being targeted in the U.S. media for trying to whitewash the grisly Saudi crime in Istanbul and allowing oil and dollars to dominate U.S. policy, he is following in the footsteps of previous administrations. This has meant green-lighting Saudi and Israeli regional policies, including their geopolitical ambitions and opposition to any U.S. approaches to Iran.

Still, President Barack Obama recognized the strategic need to eliminate a potential threat from Iranian nuclear weapons. He weathered intense domestic lobbying by the oil states and Israel and negotiated the JCPOA. But he was then sabotaged by elements in his own administration that refused to follow through on lifting all sanctions. Other reasons were found for continuing most of them, including Iran’s ballistic missile program, to which the relevant UN Security Council resolution had said “please stop” but didn’t make it mandatory. In fact, without nuclear warheads, these missiles would be marginal in a conventional war.

In sum, continued U.S. efforts to keep Iran isolated, despite the JCPOA, have reduced to zero any chance of a changed relationship with Iran, even if its clerical establishment would risk its job security by a “North Korea-like” opening to the United States, as Trump has suggested. Iranian hardliners have benefited.

Thus, the United States has been left with unresolved dilemmas, including an implacably hostile Iran and regional partners dissatisfied with U.S. policies and what they assert, based on their own self-interest but heedless of American interests, to be a lack of decisive US leadership. Further, the lack of coherence in US policy across the region, notably during the Obama administration, opened the way for renewed Russian engagement.

A Chance to Reassess

The explosion of concern over Khashoggi-gate and the questioning of the whys and wherefores of the U.S. relationship with Saudi Arabia require the United States to reassess all its Middle East policies, starting with security. Despite intense rhetoric about threats to the U.S. homeland from the Middle East, they are in fact few. U.S. counterterrorism agencies do their jobs effectively, the military capacities of the Islamic State have been largely eradicated, and the JCPOA—assuming that Trump’s reckless behavior doesn’t cause it to fall part—has mothballed for years any Iranian nuclear aspirations.

Continuing U.S. security requirements in the Middle East derive almost entirely from partners’ concerns and U.S. responses. These begin with long-time U.S. support for Israel’s security. Saudi Arabia (with other Gulf oil states) is next, and Trump is right that it can’t just be thrown overboard. But the Gulf Arab states’ security is not seriously at risk, other than from internal political and social forces, and they have overwhelming military superiority over Iran.

Indeed, Saudi Arabia is more “sinning than sinned against,” including its brutal war in Yemen, which the UN now says threatens the worst famine in 100 years. The U.S. military is a belligerent in all but name, and there is growing popular revulsion among Americans over U.S. complicity in the killing of civilians in this conflict. Support by rich Saudi nationals for the spread of Wahhabism across the region and far beyond also poses the greatest threat of terrorism anywhere in the world, but the U.S. government has for years failed to insist that Saudi Arabia stop.

In a rare moment of candor, Trump has argued that changing the relationship with Saudi Arabia would risk more than $100 billion in US arms sales, which could go to Russia or China. That is not likely. Making the shift would cripple the Saudi military for the many years needed to adapt to different equipment and technologies. Thus the likely beneficiaries would be not Russia or China but Britain and France, whose weapons are compatible with America’s. And the threat of cutting oil production gives the Saudis far less leverage than in years past. Not only have alternative oil and gas sources increased—the United States is now energy self-sufficient—but Saudi overspending on domestic programs and unneeded weapons makes them cherish every penny they can get from fossil fuels.

What Trump Should Do

It’s time, therefore, for the U.S. administration to take a step back. It should reassure Israel that its genuine security needs will be met. And it should tell the Palestinians that the United States does not accept the permanent dashing of their hopes but will support the best peace plan so far devised: the January 2001 Clinton Parameters. It should also insulate itself from attempts by Middle East countries to define U.S. regional interests. That includes ending support for Saudi Arabia’s war in Yemen.

At the same time, the United States should begin serious work on security requirements for promoting long-term stability in the Persian Gulf and beyond. It should do so both for its intrinsic value and, as an important added benefit with implications beyond the Middle East, to reduce the opportunities for Russia to continue interjecting power and influence across the region.

Among possible choices for pursuing core U.S. interests, the most likely to succeed, over time, would be fostering a classic balance of power among all regional countries. Some external management would be needed, and the United States is best positioned to play that role. Pursuing this course would not mean a rapid end of hostilities—that could only happen well in the future. For that to happen would require enlightened calculations of mutual self-interest.

Arabs, Iranians, and others are not now prepared to move in this direction. That can only happen if and when they all understand how poorly they are served by today’s chaotic confrontations and that none will be able to emerge as regional hegemon. But promoting a balance of power or some other system of shared security and structures to make it effective should at least be the basic thrust of U.S. policy for the long haul.