In a guest post for LobeLog, Max Blumenthal reports on blogger Pamela Geller’s attendance at an Israel Apartheid Week event at Columbia University in New York, her smear campaign against speakers, and her own ties to far-right European groups. (Regular LobeLog contributors have investigated Geller’s ties to other far-right groups here, here, here, here and here.)

In the days leading up to Israeli Apartheid Week’s opening event at Columbia University, leading anti-Muslim blogger Pam Geller posted an image of an SS officer with the name of one of the event’s speakers, Ben White, emblazoned on his uniform. (The image recalled placards held by far-right settlers depicting Yitzhak Rabin in an SS uniform just days before he was assassinated.) Geller was among the crowd at the Columbia event, making sure to catch White’s eye as he walked to the podium to speak. He told me that she mouthed to him, “You’re a Nazi.” The day after the event, Geller posted another characteristically juvenile screed describing White as “Nazi boy.”

There is little reason to engage a figure like Geller on the merits of her deranged characterizations. And it would be unfair to ascribe crude views like hers to the established pro-Israel groups working to discredit Israeli Apartheid Week. Their tactics are slightly more sophisticated, even if they have also demonstrated a reluctance to engage White and other participants on the facts about Israel’s systematic dispossession of the Palestinians. (Canadian pro-Israel students have united around a vaguely pornographic counter-campaign called “Size Doesn’t Matter” that invokes insecurities about penis length and equates traveling to Israel with the pleasure of oral sex.)

Geller’s attacks on White are worth discussing only in light of their irony. She is, after all, a fervent supporter of a British fascist group comprised of soccer hooligans and skinhead thugs who have delivered sig heil salutes en masse at their rallies while also displaying Israeli flags — a most bizarre melange. Geller’s endorsement of the shadowy fascist group, called the English Defense League, highlights the reorganization of the British far-right around an anti-Muslim, pro-Zionist platform designed to cultivate alliances with influential online fanatics like her.

On the same day Geller posted her smear of White, she promoted a rally in defense of the Dutch anti-Muslim extremist Geert Wilders by the English Defense League (EDL) (Wilders has called for a “head rag tax” on Muslim women who wear hijab).

“How I wish I could be there to stand with the English Defense League,” Geller pined. 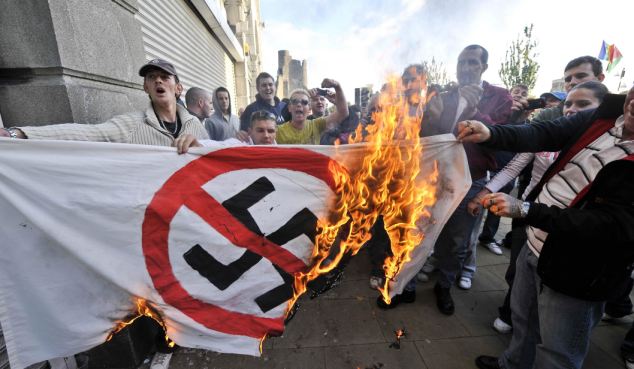 So what happens at a typical EDL rally? According to a report by Wales Online, at an October 2009 rally in Swansea by the EDL’s Wales-based affiliate, the Welsh Defense League, “onlookers were confronted with scenes of jeering men giving Nazi salutes.” At another rally in Stoke on Trent in January, intoxicated EDL activists in black masks attempted to break through police lines to assault anti-racist protesters around the block, injuring several police officers in the process.

Who belongs to the EDL? The group’s muscle is provided by thugs affiliated with the right-wing football hooligan club, Casuals United. The Casuals are led by an infamous thug who goes by the name “Tommy Robinson” and who will only appear in public in a balaclava. The Casuals are themselves a front for the another violent football hooligan gang called Soul Crew. Soul Crew’s former leader, Jeff Marsh, is now the head of the Welsh Defense League and a recruiter for the Casuals.

According to the Daily Mail, neo-Nazis from Combat 18 and the British Freedom Front have insinuated themselves into the ranks of the EDL along with activists from the incipient neo-fascist British National Party (BNP), which is led by former white supremacist organizer Nick Griffin.

Though the BNP has distanced itself from the EDL, the two groups enjoy clear membership cross-pollination. For example, BNP activist Chris Renton helped set up the EDL’s website. While the EDL remains amorphous, its leadership appears to be following the organizational techniques employed by neo-Nazi groups like the British Peoples Party, which attempted to translate its acts of street terror into political power; and the BNP, which declared a “race war” on Muslims at a 2001 meeting. (Go here for a comprehensive look at ties between the EDL and BNP.) 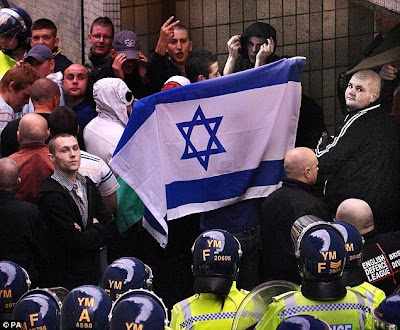 Perhaps the most remarkable aspect of the EDL is its identification with Israel. EDL activists routinely wave Israeli flags at rallies and carry placards declaring the groups support for Israel’s “right to exist” (go to :50 of this excellent BBC video report). The group’s support for Israel reflects a gradual reorientation of Britain’s far-right in favor of the policies of the Jewish state and against the rights of Muslim immigrants. While their motives for the strategic shift are largely cynical, they are also rooted in a genuine fascination with the image of Israel as a state fighting for ethnic purity against armies of Muslim marauders.

The BNP’s Griffin, who has openly denied the Holocaust and accused Jews of controlling the media, urged his allies to transmute their anti-Semitism into Islamophobia to broaden the party’s political appeal. He wrote in 2007, “It stands to reason that adopting an ‘Islamophobic’ position that appeals to large numbers of ordinary people – including un-nudged journalists – is going to produce on average much better media coverage than siding with Iran and banging on about ‘Jewish power’, which is guaranteed to raise hackles of virtually every single journalist in the western world.”

Ruth Smeed of the Board of Deputies of British Jews observed with astonishment, ”The BNP website is now one of the most Zionist on the web – it goes further than any of the mainstream parties in its support of Israel and at the same time demonises Islam and the Muslim world.”

When Israel attacked the Gaza Strip in 2008 and ‘09, leading BNP figures celebrated. ”This sort of ‘disinfecting’ process whereby Israel is required to sterilise areas of radical Islamist support … is what all nations have to do in order to eradicate Islamist cells who have managed to take over territory either within or on the edges of their borders,” BNP head of legal affairs Lee Barnes proclaimed on his blog on January 4. He continued, “Get used to the casualties – for without them any nation so infected with Islamism will surrender, rot away into liberal apathy and then dies as it is taken over.”

Griffin echoed Barnes’ comments in an essay called “Israel’s Gaza affair:” “The Israelis will NEVER get unbiased reporting on the Brussels Broadcasting Corporation, despite being the only civilised country in the region & fighting for their very existance [sic],” Griffin proclaimed. “It is NOT our place to get involved but you aren’t the only one to be 100% behind them, they are an example to us all because the only thing the Islamic Terrorists understand is FORCE.”

The reorientation of the BNP around a pro-Zionist, Islamophobic platform led directly to the rise of the EDL. Now Pam Geller has volunteered as perhaps the group’s most prominent online promoter. So who is the Nazi?

Independent journalist and filmmaker Max Blumenthal is the New York Times best-selling author of Republican Gomorrah: Inside the Movement that Shattered the Party and a Nation Institute Puffin Foundation Writing Fellow. His work has appeared in The New York Times, The Nation, Salon.com, and Mondoweiss, among other outlets. You can read his blog at maxblumenthal.com, where this post originally appeared.