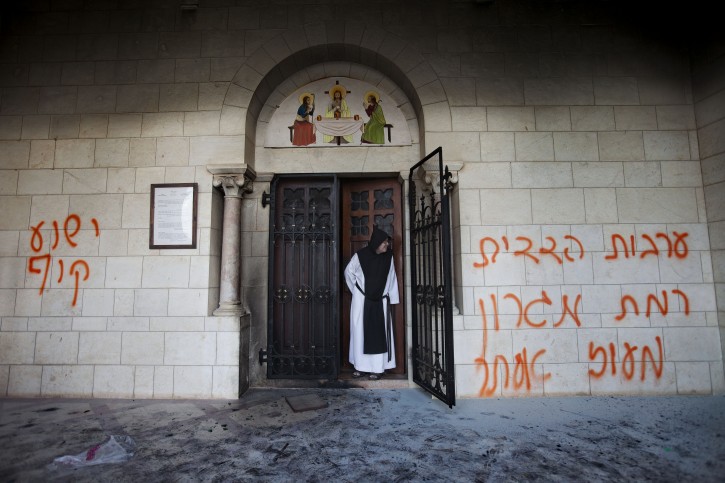 Israel is putting up more than its usual security measures for the arrival of an important person, Pope Francis, who will be visiting the Holy Land May 24-26. He’ll be the third pope to visit Jerusalem since the 1967 Six Day War.

The pontiff will begin his trip in Jordan on May 24, where he will meet with Syrian war refugees and disabled youth. While there, he will visit a baptism site on the East Bank of the Jordan River; Christians’ most sacred sites were in Jordan between 1948-1967, but are now located in territory claimed by Israel. The next day Francis will meet with leaders of the Palestinian Authority and with Palestinian and Syrian refugees in the West Bank, and conduct Mass at Manger Square, the site of the Church of the Nativity, in the heart of Bethlehem. In the Palestinian territories, painted by the Israelis as a hotbed of terrorism, the Pope will ride in an open car through the streets of Bethlehem.

But on the Israeli side of the border (boundary, barrier, fence, wall or whatever you call it), where Pope Francis will spend one very full day on May 26, Israeli authorities plan to implement and enforce a strict permit regime that will keep the public behind a security cordon, and the Pope inside an armored car. According to Haaretz, Israeli authorities believe these extraordinary security measures are both justified and necessary due to fears of anti-Christian attacks by radical settlers.

The Israeli Police and the Shin Bet domestic security agency — Israel’s FBI — have expressed concern that  right-wing extremists might try to exploit Pope Francis’ visit to to carry out a major hate crime targeting Israel’s Christian population and sacred sites throughout the country, to attract media attention. On May 21, the Israel Defense Force and the Shin Bet issued administrative restraining orders against four Jewish extremists until the Pope’s departure.

The Argentine-born Pope plans to hold a Mass at the Cenacle, a thousand-year-old structure at the the top of  Mount Zion, just outside the Old City of Jerusalem. Christian tradition reveres one of its upper floors as the setting of the Last Supper, while Jewish and Muslim traditions claim that the ground floor of the building houses the tomb of King David. Although these claims are all anachronistic, the three faiths agree that the site deserves reverence. As Ora Limor observes:

One of the most intriguing phenomena in the study of sacred space and pilgrimage to holy places is how believers of different faiths may share sanctity. Scholars and historians of religion have not infrequently noticed that the nature of a holy place retains its sanctity when it changes hands. Once a site has been recognized as holy, the sanctity adheres to it, irrespective of political and religious vicissitudes.

Jews and Christians haven’t always been willing to share access to Jerusalem’s sacred sites. Jews were not allowed to visit their holy sites in Jerusalem’s Old City when they were under Jordanian control. But the Cenacle — aka David’s Tomb — on Mount Zion, was outside the Old City, and remained on the Israeli side of the “Green Line;” Christians are allowed to visit it, but are not permitted to pray there.

Since 2008, Mount Zion has been attracting “peculiar Haredi [ultra-orthodox] groups, hilltop youths, newly religious Jews and converts often motivated by hatred of Christians and Muslims,” Haaretz reports.  Increasingly brutal attacks resulting in life-threatening injuries, as well as defacement and firebombing of property owned by non-Jews, have become increasingly commonplace in the past several months. Students at the Diaspora Yeshiva, which has acquired control of many of the buildings surrounding David’s Tomb, are suspected of being among the perpetrators of violence against Christians and their churches:

The attacks have included vandalism, cemetery desecration, car arson and rock-throwing, in addition to countless incidents in which monks and Christian clergymen have been spat at and cursed. It seems to be a consensus among Christians in the area that people affiliated with the Diaspora Yeshiva are to blame.

The head of the Yeshiva, Rabbi Yitzchak Goldstein, denies the charges against his students. Nevertheless, Goldstein was the organizer of a demonstration against the Pope’s visit by 200 ultra-orthodox Jews on May 12. More protests are planned for May 22.

Neoconservative media tend to depict Israel’s Christian population as looking to the Jewish state to secure their safety against their increasingly restive Muslim neighbors. Its 158,000 Christians, 80% of whom are Arab, constitute just 2% of Israel’s total population of 8.1 million. In fact, Christians are concerned about the upsurge in acts of vandalism targeting their institutions and sacred sites carried out by extremist Jews. In his 2013 Christmas message, Jerusalem’s Latin patriarch asserted that twenty Christian sites had been desecrated in the past year. In January, Hebrew graffiti was spray-painted on the walls of the Notre Dame of Jerusalem Center calling for the expulsion of Christians from Israel’s sacred soil. The Holy Land Christian Ecumenical Foundation reported:

The shock over the incident has prompted the Christian community in Jerusalem to protest strongly, not for the first time, denouncing these acts that reveal a deeper problem that concerns Israeli society in general and Jerusalem in particular; and which seriously calls into question religious tolerance within the society that encompasses the State of Israel, which cannot manage to prevent this type of religious intolerance.

At the end of April, just a few days after the publication of US Secretary of State John Kerry’s warning that Israel was in danger of becoming an “apartheid state,” the section of the State Department’s 2013 Country Reports on Terrorism dealing with Israel, the West Bank, and Gaza drew attention to the growing threat posed by “extremist Israeli settlers.” It cited “399 attacks by extremist Israeli settlers that resulted in Palestinian injuries or property damage” and deemed them “violent extremists” — mostly over “price tag” attacks against Palestinian Arab homes and property. “Price tag” is a code-term used by Jewish extremists to justify what they claim are retaliatory actions against Arabs or proposed policies of the Israeli government — policies that would restrict the expansion of settlements in “Judea and Samaria,” the preferred settler term for the occupied territories in the West Bank. “Price tag” has been appearing prominently in the Hebrew graffiti defacing Christian sites.

In the weeks prior to the Pope’s visit, there has been a spike in hate crimes carried out by Jewish extremists against Christians. According to Haaretz:

The various police districts were instructed by authorities to focus their operational and intelligence efforts on the Christian population and its institutions, and to consolidate extra security in these communities until the end of the visit. The police was also asked to increase its security assessments of the right-wing extremists in their various districts, with particular emphasis on holy sites.

Fueling the present wave of Jewish extremist violence against Christians have been rumors that the Israeli government plans to cede control over David’s Tomb to the Church. In February, Giulio Meotti, an Italian journalist for Il Foglio who also writes for the Israeli religious nationalist news site, Arutz Sheva, claimed an arrangement had been reached in which the Israeli government would not only grant the Pope access to the site of the Last Supper for his Mass and allow Catholics to use it for daily prayer, but also cede Mount Zion and numerous Christian sites throughout Israel and the West Bank to the Vatican, ultimately leading to the expulsion of Jews from Jerusalem:

Should the Vatican gain sovereignty over Mount of Zion, millions of Christian pilgrims will flock to the site, and this will threaten the Israeli presence in the Old City’s Jewish Quarter and Jewish access to the Western Wall. The Vatican wants the Jews out of the Old City and apparently Israel’s government is agreeing with them. Turning the Cenacle into an active church is also a way of desecrating the holiness of the site known as the Tomb of David.

In an interview with the Catholic website Patheos, Cecilia Lakin, an attorney from Detroit who is in Jerusalem awaiting the Pope’s arrival, characterized the protesters as “a small but noisy group” who reminded her of the Westboro Baptist Church, and pose no threat to the pope’s safety. Most Israelis with whom she said she had spoken with regarded them as “annoying but harmless troublemakers,” and dismissed them with a yawn.

But a senior adviser to the Catholic Church, Wadi Abu Nassar, told Haaretz that church officials had been warning about the escalation of hate crimes by extremist Jews against Christians. If Israeli authorities do not address the problem, Israel’s standing in the international community would be damaged. “We’re already in an atmosphere of terror,” he said.

Photo: In this 4 Sept 2012 AP file photo, a Catholic monk stands in a doorway of the Latrun Trappist Monastery where Israeli police say vandals spray-painted anti-Christian and pro-settler graffiti and set the monastery’s door on fire, in Latrun, between Jerusalem and Tel Aviv, Israel.