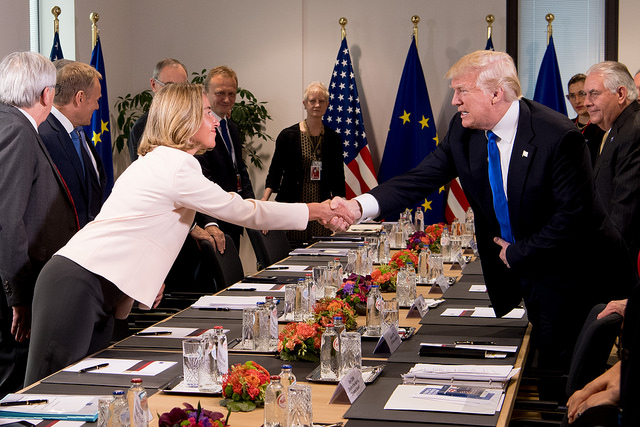 France, the United Kingdom, and Germany (the ‘E3’) appear set to intensify ongoing talks with the US in an effort to convince Donald Trump to stick to the Iran nuclear deal. Trump has threatened to withdraw from the agreement in May unless certain preconditions were met. Europeans hope the ongoing discussions will be able to find a middle way to both safeguard the nuclear deal and address outstanding areas of concern with Iran, such as on missiles and regional issues. However, Trump’s recent nomination of Mike Pompeo as US secretary of state increases the risk that this approach will backfire on Europe.

European policymakers largely viewed Rex Tillerson as a voice of moderation within the White House and as someone who, together with secretary of defense James Mattis, influenced Trump towards a more pragmatic position on Iran. If Europe is serious about saving the nuclear deal, then the appointment of Pompeo, an Iran-hawk in Washington, should serve as an urgent prompt to rethink its current strategy.

Some in European policy circles hoped that Trump’s statement on the nuclear deal on 12 January this year was part of his maximalist negotiating tactics, and that if Europe showed some flexibility, the president would be climb down from these demands. But one of the reasons Trump cited when firing Tillerson was their disagreement over the Iran nuclear deal. This should indicate that the moderate voices in the White House have been unable to bridge gaps between Trump and Europe over the nuclear deal.

Trump, meanwhile, remarked on the “very similar thought process” he and Pompeo share on a number of issues. Pompeo has been especially outspoken on Iran: he opposed the nuclear deal, supported regime change, and downplayed the costs of war with Iran. With Pompeo now in charge of US diplomacy, Europeans are likely to face a tougher and non-accommodating negotiating posture from the Trump administration over the nuclear deal. This comes against a backdrop of rising regional tensions between Iran and Israel, in addition to repeated pledges from Trump to confront Iran, most recently in his Nowruz message marking the Iranian new year.

Trump’s deal-making during his term in office should create doubt as to whether he would actually implement a side framework agreement of the type that his administration is currently seeking to strike with Europe over Iran policy. On foreign policy matters, Trump has remained dangerously unpredictable, and threatened everything from trade war to nuclear war. The pattern of negotiations between his administration and the US Congress over immigration and healthcare suggests that, even if Trump’s counterparts make concessions to fulfill his demands, there is no guarantee that he will, in the end, accept it.

Europeans should therefore be clear-eyed about the chances of success of current talks with the United States. Based on recent precedent, Trump is likely to perceive Europe’s flexibility and accommodation over Iran policy as a weakness that he can exploit to raise the benchmarks of demands. Moreover, by threatening imminent withdrawal from the nuclear deal, Trump is increasingly pressuring the E3 to jump on board with his efforts to undermine the agreement. Republican lawmakers such as Senator Bob Corker have also adopted this stance and warned that, unless the E3 sign up to the side framework agreement that meets US demands, Trump is unlikely to extend sanctions waivers due in May.

Yet, in their attempt to save the nuclear agreement through reaching a broader understanding with the Trump administration on Iran policy, the E3 must ensure that Europe does not become complicit in hollowing out the nuclear agreement. So far, the International Atomic Energy Agency has repeatedly verified that Iran is fulfilling its nuclear-related obligations. However, Iran has firmly indicated it will take reciprocal action to match any US backtracking from the deal. A potential side agreement between the E3 and the US with respect to the nuclear deal therefore risks a tit-for-tat exchange between Tehran and Washington that could alter and muddy their respective commitments under the agreement and cumulatively cause it to unravel.

In light of Pompeo’s appointment, the E3 should harden their negotiating tactics on the nuclear deal in ways that match the mindset of the Trump administration. First, Europeans should take a unified and more assertive position in forthcoming talks with the US to underscore that they will not be party to, nor accept as permissible, violations of a multilateral and United Nations Security Council-enshrined agreement. The E3 should continue to outline that it will not, and indeed cannot, alter expiration dates of the terms in the nuclear deal (so-called “sunset provisions”) as Trump has demanded. If Trump wants to kill the deal, he must take full responsibility, and Europe should avoid guilt by association.

Second, Europe should continue to show openness to working with the US administration on a follow-up to the nuclear agreement with Iran once the current deal has reached a more mature stage of implementation. The E3 should also have a candid exchange with Iran on regional security and demonstrate to the Trump administration that a range of tools exists to address concerns related to Iran. But in return for this flexibility, Europeans should outline an expectation that Washington will adhere to its existing obligations under the multilateral agreement and minimize the unpredictability surrounding Trump’s waivers of sanctions.

The sequencing of European measures and flexibility will be important to strengthening the E3’s position. For example, the European Union should first receive firm assurances that Trump will waive nuclear-related sanctions in May before it even debates the tougher measures against Iran’s missiles programme proposed by the US and reportedly supported by the E3 during a meeting with EU foreign ministers on Monday this week. The E3 should also consider how political and legislative measures within the US could better guarantee US commitments to the nuclear deal. This could entail extensions in the length of time between each waiver of US secondary sanctions related to Iran’s nuclear programme (thereby easing the unpredictability surrounding Trump’s actions), and pressing for progress in the Airbus aviation deals with Iran explicitly permitted under the nuclear deal.

Third, Europeans should prepare for the worst-case scenario – namely, a US withdrawal from the agreement and snap-back sanctions in May – and minimise the damage that will ensue. Pompeo’s appointment should be a trigger for European policymakers and companies to step up contingency planning to salvage the deal even without the US. For Iran to continue implementing the restrictions on its nuclear programme, there must be a degree of political and economic incentives. As outlined elsewhere, Europe could provide this package to Iran by using a range of political and technical tools that ring-fence companies from the enforcement of US secondary sanctions through legal carve-outs, sector-specific exemptions, political understandings, and reviving the EU Blocking Regulation.

In current talks with the US, Europe should privately stress its willingness to pursue alternative options to preserve the nuclear agreement. A significant benefit of outlining a contingency plan at this stage is the deterrence impact it may have on Trump’s decision to kill the deal through highlighting the isolation the US would face. In short, Europe should outline, as it has done on the issue of trade and the Paris climate accord, that it will work with like-minded coalitions to fill the gaps left by US withdrawal.

This strategy may not, in the end, alter the decision by Trump to execute his campaign promise to “dismantle” the “disastrous deal” with Iran. But this approach at least provides Europe with the political capital to try to salvage the agreement and thereby secure its own non-proliferation goals. If Iran’s nuclear program expands in respond to Trump’s withdrawal, other regional powers, such as Saudi Arabia, have warned that they will do the same. A firm European position in defense of the diplomatic accord may also reduce the growing risk of confrontation between Washington and Tehran in the Middle East, for which Europe will inevitably bear the cost. This approach also sets a precedent that Europe is a credible international partner, demonstrating political willingness to safeguard international norms at a time when global leadership is lacking.

Reprinted, with permission, from the European Council on Foreign Relations.