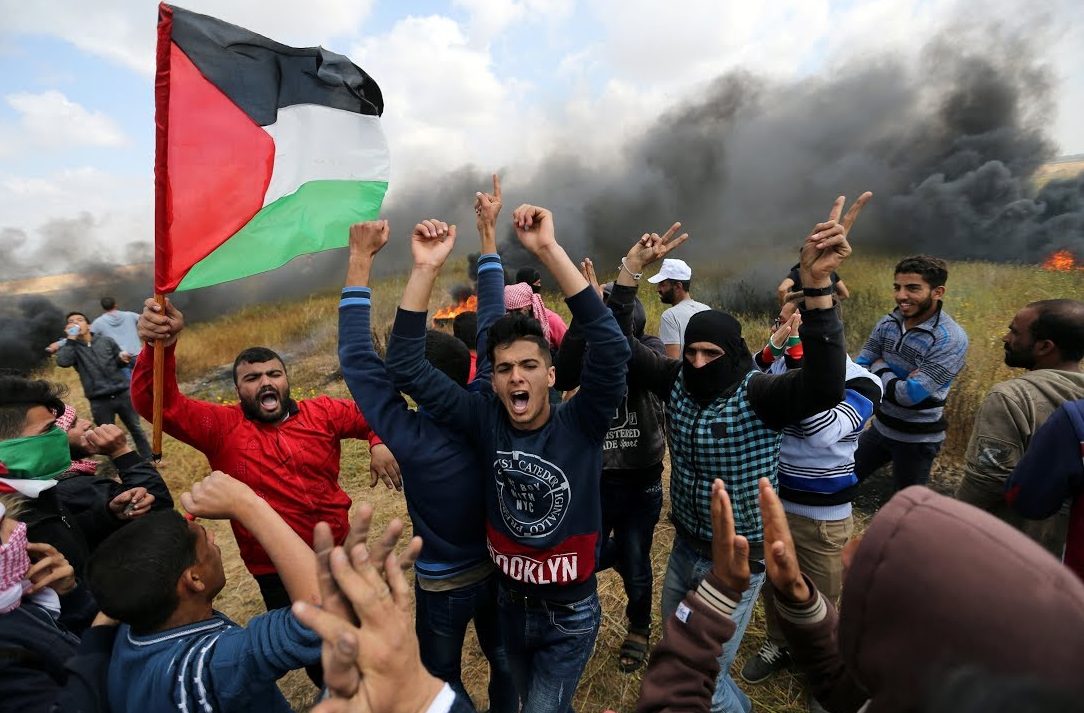 What happens when the prisoners stage a protest? We’ll just shoot them from the other side of the fence. And if the gunfire looks bad on TV? We’ll send in the prime minister’s advisers in fancy suits to give interviews near the fence.

And if the inmates burn tires? We’ll look into prohibiting tires from being brought into the prison. And if the prisoners come to the protests by the busload? We’ll threaten the bus company owners, and so on, and so forth.

And so it goes, from one year to the next, one Friday to the next. In the meantime, the death toll rises and Gaza’s beleaguered hospitals are pushed ever nearer to collapse.

What’ll happen next Friday? Never mind reality. Have some more propaganda instead. It’s all their fault, says the man in the suit.

Here’s a question for Israelis: What would you do after living for more than a decade under blockade, on a small strip of land roughly half the size of New York City, in conditions of severe overcrowding with no seaport, airport or any other avenue by which leave? With no jobs, no hope, no future for you or your children, dependent on humanitarian aid that may well stop coming, with only a few hours a day of electricity, and water that’s polluted?

The Israeli propaganda machine dupes Israelis into thinking that the two million people living in the besieged Gaza Strip are not human beings. Instead, we are told, each and every one of them is actually a murderous terrorist. Here they come, hell-bent on destroying us. They are armed with stones and equipped with onions as shields. They’re a deadly, primeval swarm. Nothing but live gunfire every Friday and bombing and shelling every few years can keep them in check and ensure they toe the line in the prison we’ve confined them to.

But what happens after the propaganda? How many more Fridays (scores of dead, hundreds of wounded), or rounds of air strikes (thousands of dead) will keep Gaza contained? Is this Israel’s vision? Is this a strategy? Is this the future?

As far as Israels are concerned, the residents of Gaza simply woke up one Friday and decided to swarm the fence. And even if they do have any grievances, they shouldn’t address them to us. It’s all the handiwork of Hamas. After all, we left. They’ve been managing their own affairs for years; it has nothing to do with us.

But it turns out you can’t just walk out and shut the gate behind you on a small, crowded piece of land you ruled for 40 years, especially not when you’re still calling the shots on how many trucks can come in and out, or how much water and electricity is supplied to the people living in the enclosure you wanted to erase from your mind. Gaza and its two million residents cannot be made to disappear, not literally and not figuratively.

Reality is stronger than any propaganda campaign. It will ultimately break through and penetrate public awareness. Even the inmates in the Gaza prison managed to remind us they exist – and on the first night of Passover at that. Even after 50 days of bombing them in the summer of 2014, we had forgotten they exist. Even though we killed 547 children back then, lo and behold, they’re still there. The great March of Return hasn’t gotten one Gazan past the fence, but it has returned Gaza to the public eye.

How do Israelis envision the future? The sea won’t swallow up Gaza, nor will Egypt. Donald Trump won’t save the day, nor will Rwandan President Paul Kagame. How do we build a reality where Gazans have a future? How do we ensure our two million neighbors have electricity, clean water, and jobs? Thirteen million people live between the Mediterranean and the Jordan River; nearly one out of six lives in Gaza. What framework will secure political rights, freedom and a future for this vast public?

All of that is a world away from the mind of the man in the suit talking to reporters near the fence. He’s busy with propaganda now. To hell with reality. There are dead and wounded in the background, but the suit remains spotless, not a speck of dust, not a drop of blood. That same suit is pressed and ready for next Friday, and for the one after that.

Hagai El-Ad is the Executive Director of B’Tselem. Republished, with permission, from +972 Magazine.